If you are wise, you regularly read Run with Jill, the blog of Slow Ernie’s longtime spiritual adviser. I first came across her in the ’60s on the RW Loop site. She was a terrific runner, a nice person and a gifted writer. 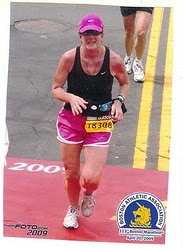 She has since moved on to her Big-Deal Blog. I am a faithful reader but rarely comment there because unless you catch her posts minutes after they go up, you’re relegated to Response No. 3,522. No need for her to get the big head.

So what’s the point here? She was sidelined a while ago with a career-ending injury. If it were me there would be homeless guys all over Corpus parading around in racing flats, because I would have just given up. But Jill researched, experimented, suffered, researched some more, cried, laughed and kept going.

“No running” became “well, maybe some biking” and “OK, a jog/run” and “well, maybe up Pike’s Peak, but only one way.”

And just like that, she’s back in her second week of marathon training. And kicking some serious buttocks.

The internet is an odd place. You don’t really know anybody, yet you know them really well. Jill and I at the same time have gone through injuries, unemployment, frustration and maybe the early stages of menopause. Or maybe I’m just crabby by nature.

All I know is, her comeback makes me really, really happy.

Drop by her joint sometime when you need a little inspiration. You’ll be glad you did.

But don’t bother trying to leave a response …