I’m running along the beach trail. It’s one of those glorious days you don’t want to end.

It’s a spring afternoon, which means the joint is hopping. Just enough runners, beachers and turistas to make the run interesting but not claustrophobic.

A guitarist is playing an excellent rendition of Stevie Ray’s “Cold Shot” at the little outdoor cafe. It may actually be Stevie Ray; I’m not wearing my glasses. If so, he’s in fine form for a guy who has been dead this long. I guess alcohol is a good preservative.

A university team canoe race is going on. Engineering students are racing homemade concrete canoes. I stop to watch for a few minutes and admire the form of the four-member teams, which appears to consist largely of whacking each other with their paddles and trying to capsize. If the three stooges had a canoe team, they would have been competitive here. And the need for four members would at last have allowed an episode in which Curley and Shemp appeared together. This is exactly the sort of thing collegiate athletics inspires.

I run through the finish line of the  Navy Marathon. There’s nothing going on there, so I’m able to do my triumphant sprint through the chutes to the cheers of the adoring gulls. A little kid looks at me like I’m weird. Little kids are wise.

I’m reluctantly about to call it a day when this sign appears on the sidewalk. 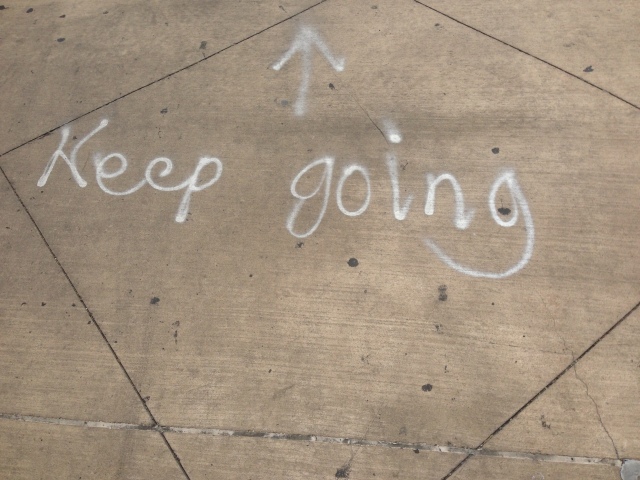 It’s EXACTLY like the God movie where John Denver is just minding his own business and George Burns flashes up a freeway sign that says “DON’T FLY ULTRALIGHT PLANES, YOU MORON!!!” Or something. I haven’t seen it in a while.

Never mess with a sign from God. So I keep going. Sure enough, a fabulous run. Kids in fountains, a pelican party, a heron so close he could hand me a Clif bar if he had one and had hands and the inclination to give it up. He did not. He did not. And he did not.

The downside: God never put up a sign that said “OK, turn around now.” So I’m in Houston.

Bonnie, could you maybe pick me up? And bring a breakfast burrito. I’m very hungry. And a fluffy towel with a good Internet connection. Or just send a heron with one.

The moral: George Burns is a very mean man. I hope they don’t allow cigars in heaven …