This weekend was a multiday event. Saturday was the Wild Hare. Friday night was the Coffee Porter and Cracker Jack Marathon.

This is what Joyce and Joe, the race directors, look like if you ask them to stop and pose. 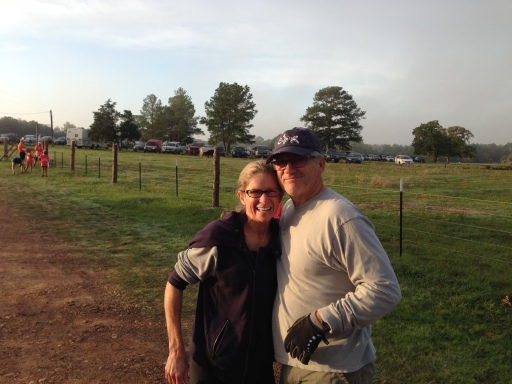 This is what they look like in real life.

A new feature at the race this year. I was going to ask, but figured it would cost me two minutes.

The course is a crazy roller-coaster in Central Texas. It’s a 7.5 mile loop so I ran it twice for the 25k. The 50 mile guys something like 37 loops.

Some of the steepest drops I’ve ever come across, and they’re totally smooth. Bad day for wearing shoes with no lugs. I saw lots of big kids with dirty backsides, so I guess it was a common sentiment.

In contrast to most Joe runs, this one if largely smooth, runnable dirt, if I had been able to run. My knees still aren’t working, and I managed to crash in the first mile pretty hard, so it was just a day for limping. Luckily you couldn’t ask for a more beautiful place to shuffle. I tried Tailwind for the first time. DAMN that’s a lot of sodium. But it’s all I had for 4 1/2 hours and I never felt hungry or queasy despite it being a warm day, so maybe. I hope to try it again when I am moving along a little more quickly. Yeah, right.

Pine cones! Note the lack of toe bumpers on shoes. I am not a Smart Person. The race is held on another of those ranches that have been turned into bicycle playgrounds, so the course is mostly a singletrack. The Joe version adds a lot of running through open pasture land, so it’s the perfect back-and-forth mix. Just a lovely course if you ever find yourself in Warda with a couple of hours to kill. 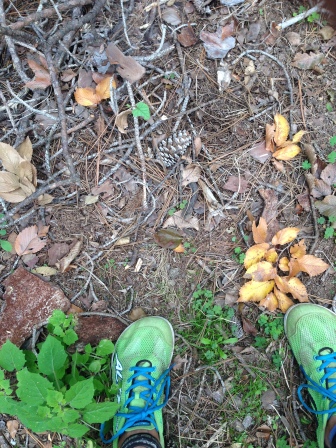 There are two or three or possibly 25 amazing bridges on the course. I’m not sure how many I crossed over multiple times. The course is hilarious because you’re always running along in the opposite direction from someone else on a parallel trail.

Weirdest part: A guy had written on the Tejas facebook page about how he enjoys running with his solar-powered speaker in the back of his pack. I had the incredible good luck of running behind him, and then next to him as the trails came near each other, for a pretty good chunk of the race. His soundtrack: The Cure. Now, mind you, I enjoy Robert Smith as much as the next person. But as a motivational soundtrack? Maybe sometimes on a long run you just want someone who suffers even more than you. I would have put him in the penalty box.

I averaged around 18-minute miles, which younger Gary would have winced at, but these days it suits me just fine. Is there a point of going to a race when you’re this slow? For me, the answer still seems to be yes. We had a great night camping, saw some beautiful scenery, communed with a trail and ate way too much Mexican food on the trip home. Speed is all relative, I suppose. The question is: Did you leave the race feeling happy? The answer these days still seems to be yes. So on we go.

See you in January, Tejas peeps …