oh, yeah. and there’s that whole childbirth thing too

Hey look ma
here comes the elephant boy
bundled all up in his corduroy
headed down south towards Illinois
from the jungles of East St. Paul.
— the prophet john prine

Yes, I know it was insane.

We are locked in the middle of a deep freeze along the Texas Gulf Coast. Temperatures have sunk to unimaginable lows. If you can imagine that. Which you can’t. Because, well, you know, they’re unimaginable.

I have been cocooned inside for days, running shoes sitting around the imaginary fireplace. Ah, the soothing smell of roasting midsoles.

But I couldn’t put it off anymore. I had to run.

The problem? Living in a warm land, I’m not much on arctic gear. I assembled what I could find. Long-sleeve polypro base, tech shirt over it, Marmot jacket, wool hat with jacket hood cinched down, warm gloves. It’s days like this that I wish I owned some socks. Feet were cold.

I checked the weather on the way out the door, and my worst fears were confirmed. 48 degrees. FORTY EIGHT!!!! Dear God, what happens to humans when they attempt to step outside when the temperature is below 50? We would find out.

The worst part: The first part of the run was into the biting north wind, sending the wind chill down to at least 45 or so. It was so cold I couldn’t feel my fingers. Or maybe that was just because I was wearing gloves.

I bravely trudged along, weighed down by the 35 pounds of clothes and icicles in the mustache. As I ran along my solitary path, I saw her. The weather didn’t seem to faze her.

Old friends that we are, we paused for a photo. Me, with my Iditarod gear. Her, with, well, nothing. And not even a chill bump.

If you ever need proof that females are tougher than males, just go for a run in the cold on the Corpus bayfront … 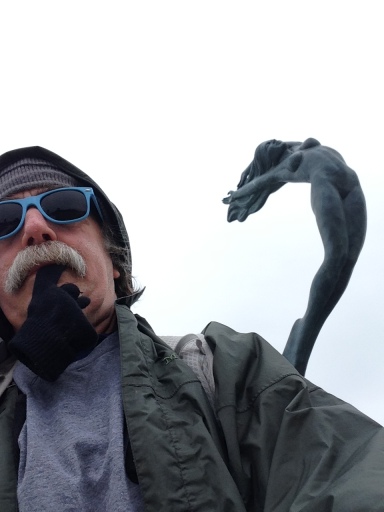 p.s. yes, it was so cold that even my sunglasses turned blue.

3 Responses to oh, yeah. and there’s that whole childbirth thing too