things my dad taught me

Once upon a tandem, my dad and I set out to ride across the Rockies on a bicycle for two. I never said this was a good idea. Well, I probably did, but clearly I was lying.

I was living in Arizona at the time, and Dad was in West Texas. I had a tandem bike, but we had never ridden together. What better way to start than at 8,000 feet with 70 pounds of gear going down 10 percent grades?

We met at the Denver airport, put the bike together, strapped on the panniers and took off. It was glorious.

We experienced the high one gets from thin oxygen and thick coffee. We were a terrific team, riding effortlessly on a chilly day in the mountains. OK, maybe the only one riding effortlessly was ME. That’s the good thing about riding a tandem with a new guy; he doesn’t realize the front rider is just spinning his legs. In my defense, I steered. It was great.

We must’ve knocked out 70 or 80 miles on the way out of Denver and into the wilderness. I remember a chicken fried steak that first night that would make a Texan blush. It was going to be a fabulous week.

We had just started out on day 2 when I noticed the shifter wasn’t working. We had snapped the cable. I had a decent repair kit, but a tandem cable was not in it. We were screwed.

As luck would have it, we limped to a motel run by a guy who was a former cyclist. He pulled out his boxes of spare parts, and there in the bottom was a spare cable!!!

For a regular bike. Which is half as long as a tandem.

Dad, who is a genius with his hands, spent hours trying to do workarounds, but there’s just too much stress on the cable to make it work. We were screwed.

As luck would have it, he pointed us down to the road to a store in a little town that specialized in tandems. What are the odds? We hitchhiked to the town (nothing quite so surreal as hitching with your dad.) Sure enough, there it was — a tandem bike shop.

Which was closed for a week because the owner was on vacation. We were screwed.

We caught a bus back to Denver, rented a van, and became car campers. We saw a million times more than we would’ve on the bike. We drove through a snowstorm at the top of the Rockies. We got caught in the tent in a driving rain, leading us to drive into town, rent a motel room and watch the Cowboys on Monday Night Football while eating pizza and drinking beer.

We tested the theory of starting a wet campfire by dumping a gallon of camp fuel on it. Eyebrows optional. We ate freeze-dried food even though we no longer had to. We had a party in the wilderness.

It was an incredibly great time. It wasn’t exactly what we had planned, but we made it work. I loved him for that.

Fast-forward 20 years or so. We were planning to go to a baseball game tomorrow. I’ve got a race in the morning, and then it would be a leisurely afternoon in the stands on a warm February afternoon. Perfect.

He’s ailing. They’re not sure what’s wrong exactly, but he’s hanging in there. Smith Boys are tough.

He’s teaching me a lot about liquid nutrition. Tailwind? Pediasure? Forget it. He’s got an amazing assortment of stuff . I wonder if I could get Mo to run with an IV pole to carry this for me.

Do I run the race tomorrow while he’s still in ICU? I guess maybe. He’s in good spirits and already talking about the Rangers’ prospects in 2014. They never give up, those Rangers fans.

I didn’t ask him what he thought, but I didn’t have to. He loved to run till his knees gave out. I had a treasured poster my newspaper published one year at the Capitol 10,000 in Austin. Out of 40,000 people at the race waiting for the start, Brother the Younger, Dad and I were in the middle of it. It was a glorious shot. I wish I still had it. I know he’s proud that I’m still out there plugging away after all these years.

Life hasn’t turned out exactly the way we planned, but we made it work. I love him for that.

So I guess I’ll do it. I’ll go out on a little trail in San Angelo and think about that week when things didn’t turn out the way we expected, but still turned out perfect.

When you think you’re screwed, just shift gears. Even with a broken cable.

Keep running, do your best, and never give up. Eyebrows optional.

Come home soon, Dad. We’re running out of diet Coke. This run’s for you …

p.s. and then a few years later we went backpacking in the Grand Canyon with Brother the Elder and it went flawlessly, Except for Dad’s chocolate pudding. That’s the other thing he taught me: Never, ever buy freeze-dried pudding … 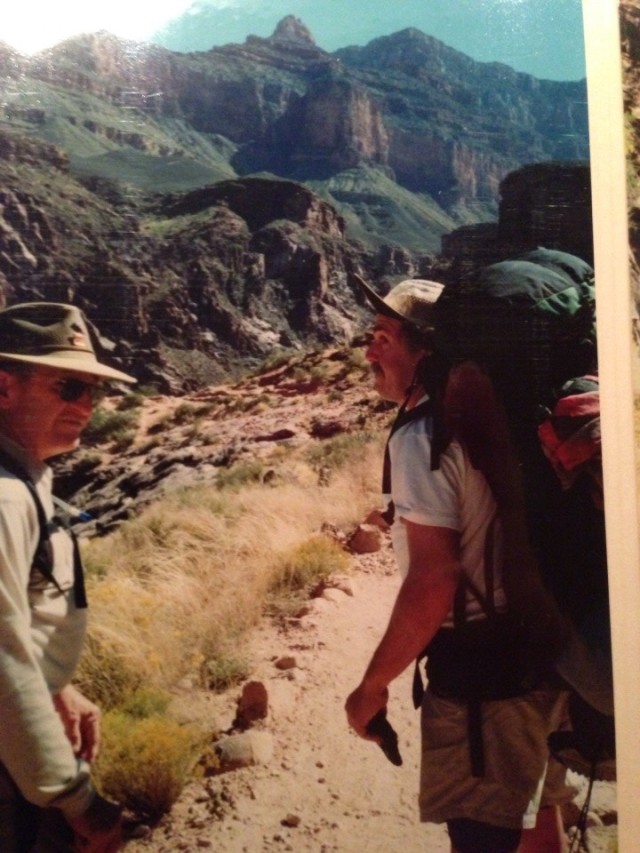 2 Responses to things my dad taught me