What a beautiful moon! I can only imagine
what it must have looked like for real!
I used to watch the moon a lot.
When your father was in the service
and stationed in Japan,
I always told him to watch for the first star
that came up in the west and I’d be watching too.
It was sort of special …

Ma wrote that a while back, before she went to hang out with John Wayne. I had totally forgotten it, along with stuff like the names of the “Mod Squad” guys and why the hell I ever went into journalism.

So I didn’t give it much thought when we headed out into the blackness for a half-hour drive to an early morning race start. The sky was totally dark except for the tiniest sliver of a moon. And a star. I stood for a long time, admiring it. Mo admitted long ago that the stars at night really ARE big and bright deep in the heart of Texas. And here we are, staring up in awe.

I love that moment in the predawn quiet when you glance up and see that solitary star, reminding you of your place in the universe.

And you realize it’s not a bad place at all.

We went to the race. The sun came up, the heater turned on, the race went down, we toodled home.

A few days later, I was thinking about how this would be the first Mother’s Day where Ma won’t be there. Which sort of defeats the purpose. Mo and I miss her a lot.

And then I realized. She was just celebrating early. I was watching that first star coming up. And I’m sure she was too. It was sort of special. 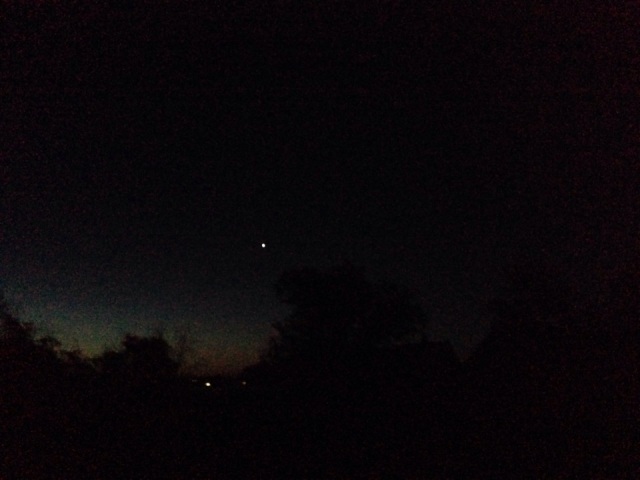