Longtime readers will recall the 72 Hours of Muskrat. Run as many miles as you can in 72 hours. Simple.

Except it was sort of hard. As it turns out, the Fourth of July weekend is hot, the course is crowded, I’m old. Not the best combination.

I set out to get in 100 miles, just because that’s a round figure. “Runners like to train 100 miles per week because it’s a round number. But I think 88 is a lot rounder,” the prophet Don Kardong once said. He didn’t show up for the weekend. But Gumbo and Matt did, driving down from Houston to send me on my way. What more could you ask for in a running friend?

Thanks to Jenny knocking out the first 14 with Justin and me, and Gumbo refusing to let me quit after 90, I hit my goal of 100 on the evening of the third day. And that was that.

A belt buckle came in the mail, courtesy of the Flying Matzi. It’s made from petrified Oreos and nail polish, their specialty, and it’s something I will treasure forever.

Running awards are rare. Friends like the Matzi, Gumbo and Matt, Jenny, Justin and of course the ever-patient Mo are even rarer. I am a lucky guy to have both. 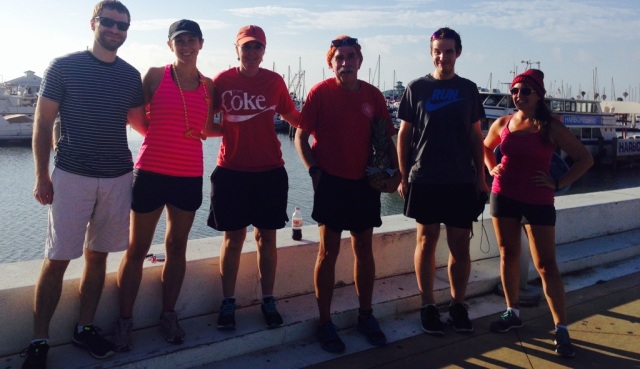 2 Responses to Best Award Ever