my life as don juan

I’m in some variation of “Ocean’s Eleven.” I assume I am Brad Pitt, but there’s no mirror, so I’m not sure. I know, I know. I’m Carl Reiner. Shut up. My dream.

I’m in the middle of running a doublecross scam on Al Pacino, who is the casino owner. I was supposed to have placed a bet that would have won $100 million. The fix was in, so plunking a hundred bucks would have brought the payoff. I don’t know what the game was; I’m not a Vegas kind of guy. And I have no idea why a casino owner would be putting in the fix where he would lose a hundred million.  I’m just acting out my part, which is to mess up the bet and look dashing in my open-collar sports coat. Why don’t I own a sports coat? And what sport is a sports coat for? Is it only for dashing? I’ve got a Marmot jacket for running, but it doesn’t appear to have been cast in the film. No marmots were harmed in the making of this movie. I digress. Back to the show.

And then, there’s Mo.

You’re breathing weird, she says. She’s worried, and shaking me so I’ll wake up.

I realize I’m hyperventilating. Was it because of the movie? Or did I create the movie because I was hyperventilating? Was it the four tacos, three cookies and one 1554 at 1 a.m.? Fallout from the Great Monkey Heart Run Experiment? Work stress? Just one of those things?  I don’t know.

I roll over and go back to sleep. An hour later, I wake up. No Mo.

I tuck her into bed and come back to the living room. Lucy is in the middle of the episode where she tries to steal the Don Juan audition scene from Ricky. I think it’s a re-run.

I put on Joni’s “Hissing of Summer Lawns,” because what else can you do at 6 a.m. when it’s dark and you’re scared?

I’ve got a head full of quandary … 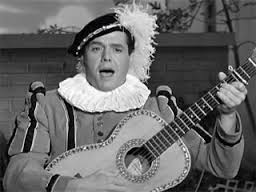 no sock monkeys were harmed in the making of this blog.
View all posts by gary →
This entry was posted in running and tagged life, running. Bookmark the permalink.
%d bloggers like this: