what’s half a kilo among friends?

I’m toodling along in the forest. Yes, I toodle when I run. Don’t judge.

It’s a small race in a lovely park. Pine trees everywhere. Super muddy singletrack, a little grass, a few jeep roads. Perfect course. Sunny day. Warm. Happy. Garmin buzzes as I go through the first mile at 13:08. Just about right. I turn my brain back on autopilot. I go along for another third of a mile. And then.

It’s at 1.3 miles. I’ve run a lot of races where the mile markers were off because the actual split was at an intersection or a weird spot where it made the marker impossible, but not here. This is just off. WAY off. Oh, well. A fluke.

I shut the brain off again (my brain doesn’t particularly care for running and tends to take race days off.) A mile of sloshing later, the Garmin buzzes at the 2 mile split. 12:48. Again, just about right. I had hoped for 12’s going in, but as soon as I saw the terrain I knew this would be more of a 13 adventure. All’s well. Until.

And so it goes for 10.3 miles. The course is basically flat (Houston is not known for its mountains). It feels sort of like Rocky except there aren’t as  many roots. I manage to find one, of course, for a very unspectacular crash that hurts nothing except one finger. And I have nine others. No harm.

Back in the old days, before there was GU and GPS and GRE and motorized transportation, I suspect race directors just made up distances. We ran a 50k at South Mountain in Phoenix that was out and back on a 14 mile trail. I guess the South Mountain 28 didn’t have the same cache. The Bloody Basin 100 started in a convenient parking lot and the turnaround was an enormous power line in the middle of nowhere that made for an easy to locate landmark. Nobody questioned the odds of that being exactly 50 miles. The Mt. Ord Marathon started in a little dirt parking lot, went to the top of Mt. Ord, back to the bottom down another trail, back halfway up and then back to the little parking lot. What are the odds that it happened to be exactly 42.195 kilometers? All we knew was that it hurt a lot, and running through knee-deep snow wasn’t that much fun, whatever the distance was.

But now we know the truth about race courses. The truth is, they’re often not exact at all. The other truth is, I still don’t much care. Running is fun. Worrying is not. I’d rather stick with that first one.

I’m about a quarter mile from the finish when I see Mo standing alongside the trail. I tell her the course is three-tenths of a mile long, hoping she’ll cheerfully offer to give me a piggyback ride for the last quarter. She does not.

“Ah, that explains it,” she says. A few minutes earlier, a woman had come by on a rant about how mad she was and no way in hell was she going to run the extra distance. Mo didn’t know what she was talking about, but the bonus 0.3 revelation explained it.

I shift into my Incredible Sprint and finish the race. They have barbecue, homemade beer and blue Gatorade. Two out of three. We eat, and I bask in the OK-ness of finishing with no disasters. 13:14 overall pace and no bonk. Maybe a little bit of confidence in the plan and the upcoming schedule.

But it keeps bugging me. Why? Every mile marker after the first mile was spot on. Why would they have missed the first one so badly, ensuring that all the splits were wrong as well? I watch one of the 50k guys go by as he begins the second loop. And then it hits me.

Maybe that’s the moral, in a South Park Cartman Preaching kind of way. Don’t get hung up on exact distances. Get hung up on sunny, warm days in the woods, splashing through mud puddles and listening to wary birds as you spend a couple of hours being a kid all over again. It’s a trail run. There are no world records at stake. Distance is a state of mind. Have fun.

I gotta take Mo on that Mt. Ord run someday. Whatever distance it turns out to be … 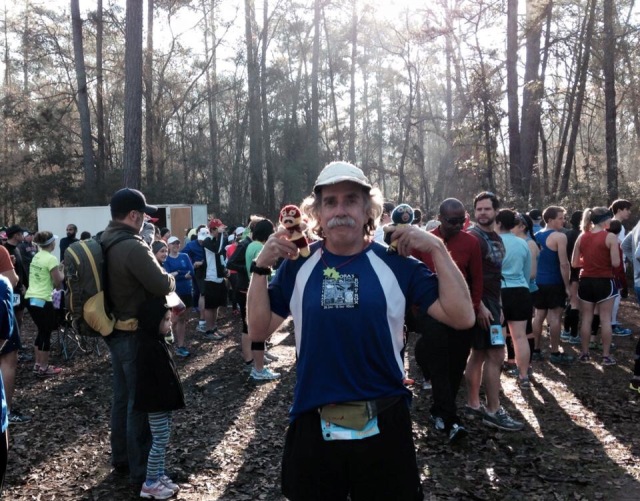 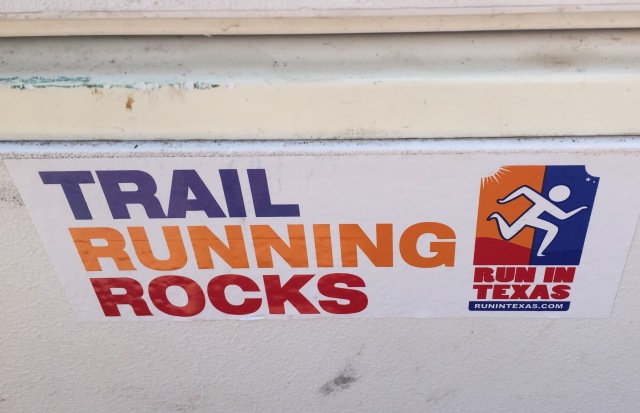 1 Response to what’s half a kilo among friends?