It seemed innocent enough. The rules were simple:

2. Wear a race bib that says “Arantxa Sanchez Vicario presents the Pinyata Yada Yadda, unless you spent 30 bucks on a bib for a race that you totally slept through, in which case you can just make a passing reference to Arantxa and call it even.”

3. Wear a tattoo declaring your love for your favorite Willis Alan Ramsey song.

4. Run with a pinyata and a minimum of two (2) luchadores.

5. Cause your pinyata to commit a felony at some point during the run.

Cake. And I like cake. Except maybe that going the distance song. And so I did.

Longtime readers will recall that this contest was all Mo’s fault. Her idea, her rules, her insistence that we actually participate in it ourselves. So as the race gun went up, she leaned back in her chair and propped her feet up in the shade. Damn birthday exemption. The rest of the guys in the chair weren’t so lucky.

The racing pinyata was designed to be both hands-free and aero. I wanted to wear it in front, tucked into my shorts, but Mo assured me the recent Supreme Court decision would not cover the appearance of the act that would be appear to be taking place. So I opted for luchadores in front, pinyata in back. The stage version of The Three Amigos, except no El Guapo. Which would an excellent name for a Mexican food restaurant.

Although I realize most contestants are smitten with “Muskrat Candlelight,” I have always been a fan of “the ballad of spider john.” Plus, it was never covered by a guy wearing a Gilligan’s Island hat. 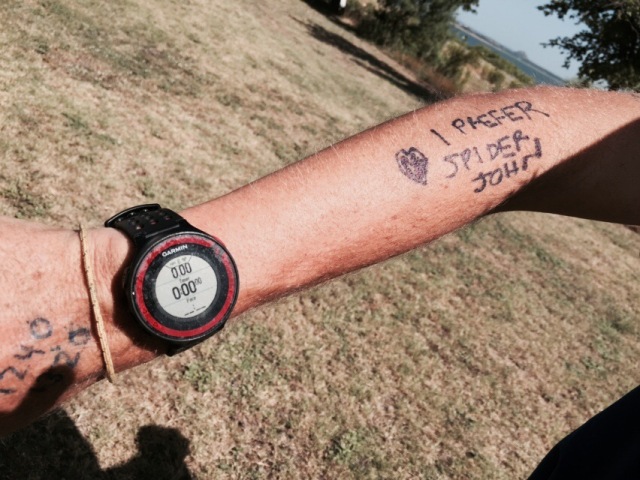 I always amuse myself with my enthusiastic intentions of running races in a place called “before noon.” I had picked up my bib at 3 p.m. July 3, a perfectly reasonable time for a run. Unfortunately, the race was at 7 a.m. As if life exists at that time of the morning for folks whose last names don’t begin with Pee. So I had a perfectly good bib to race in a week and week and eight hours later. 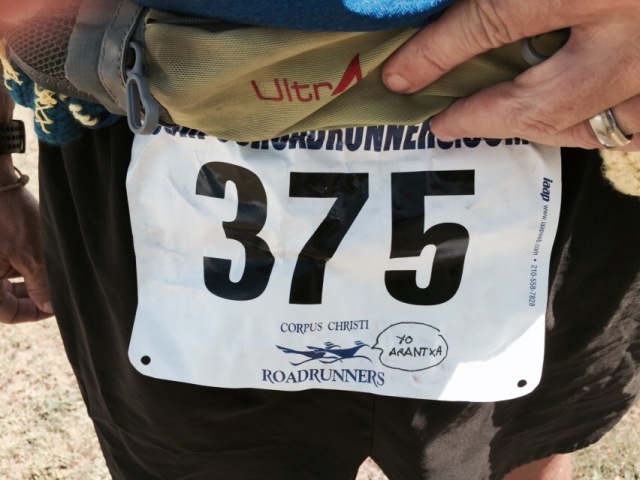 The race was on a little island somewhere in Central Texas. I’m not sure where. I was just following google maps. The thing you forget about living in Corpus Christi is that it isn’t all that hot there because it’s only sort of like living in Texas. Here, it was 97 in the shade, and there was no shade, since Mo was hogging it all. And it was next to a lake, so with the relative humidity, the heat index was 1,423 degrees. The flamingo working the starting line passed out. Bad sign.

I know, I know. That’s all fine, you’re saying. But what about someone carrying a big stick? Luckily, Zip Lock Pancho was packing the heat. Zip Lock Pancho would make an excellent name for a Mexican food restaurant.

Sadly, the course wasn’t marked. Orienteering isn’t my strong suit. Oreoteering maybe. And I’m not sure I own a suit. I think it’s a rental I never took back. Naturally, we got lost shortly after the first intersection. We eventually followed the sign pointing us to the Lushes.

The pinyata eventually got us back on course, although it required a few felonies along the way. It was a day of Trespassers W, with me portraying the Bear with Very Little Brain, and the pinyata as Tigger. What is the pinyata’s name, you ask? Texans don’t name their pinyatas under 4-H rules. Never name something you plan to eat for dinner, or beat the crap out of with a stick.

The race took its toll. I was sweating like crazy, and the pinyata was leaving little pinyata parts behind. Who knew pinyatas shed? Part race, part science lesson. 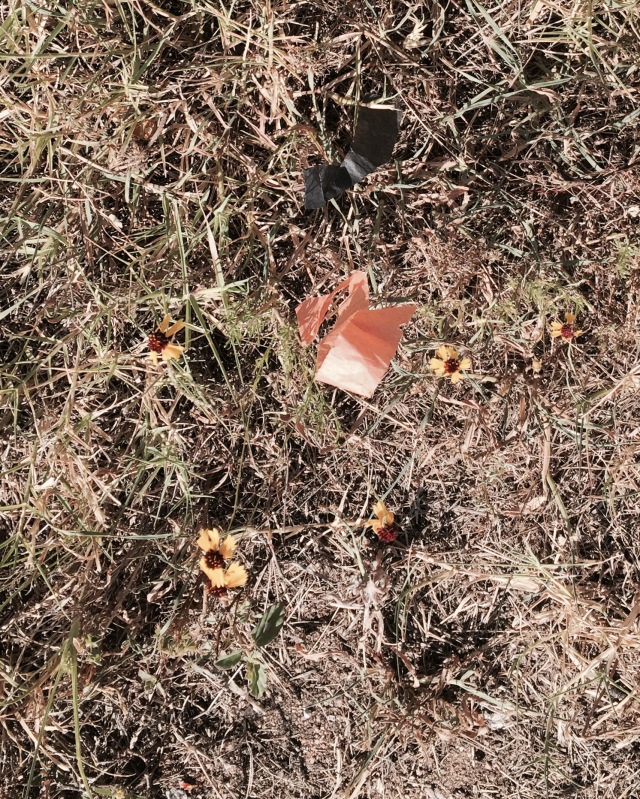 As we neared the turn, the pinyata lost interest and tried to thumb a ride, only to find out he has no thumbs. To which he is opposed. It was cruel to advertise refinishing when I hadn’t even finished. oops, excuse me, jenny. SCIENCE!!!!

But as the miles passed by, he warmed up to the run and even met some locals along the way. Yes, this is how catfish originated.

The highlight of the race: At about mile 3, a sheriff’s SUV came driving slowly by. About a minute later, a second sheriff’s SUV came driving slowly by. Mind you, I’m on an island with a population of about 100. A minute later, the first sheriff’s SUV  did a U-turn and came by again. A minute after that, the second sheriff’s SUV did the same. They never stopped or acknowledged me or nailed any of us with a Taser. I guess the locals don’t see that many runners with two luchadores and a pinyata running in these parts. Or maybe we shouldn’t have trespassed. Is tampering with the U.S. mail a federal offense? These runs have too many rules. No, I did not take a photo. I wouldn’t last long in prison. My brother mentioned afterward that there are concerns of terrorists blowing up Buchanan Dam. It slipped his mind to mention that BEFORE the run. I’m guessing he was jockeying for more ice cream for himself.

As we neared the end, we were reminded of just how difficult this event is when we came across one of the contestants from last week.

And then, the finish. The flamingo was revived and there to greet me at the triumphant end. I knew exactly how Scott Jurek felt as he finished the Appalachian Trail, or at least how he would have felt had he finished with a pinyata. Scott Jurek would make an excellent name for a Mexican food restaurant.

What was learned? Running with a pinyata is easier than you might think. Or you might not think about it at all. Earlier field reports are true: If you run while wearing a bib, you can get away with anything. And you can’t ask for finer running companions than dos luchadores. Hey, that could make a good name for a fast-food Chinese joint.