I’m looking in the mirror at an old T-shirt given to me by my good friend Stephan Pastis, creator of Pearls Before Swine. Or maybe he made me pay 20 bucks for it. And possibly I’ve never actually met him.

Longtime readers will recall that margarine is named after a line in a Pearls cartoon. “But I LIKE margarine,” Pig says. I always suspected Pastis was a visionary. But then.

I remember what the cartoon, drawn years ago, says.

In the first panel, Goat (the intellectual/philosopher/tin can eater of the group) stares into the distance as he says, “Do you realize that while most people in this country spend more than they have, people in China earn just a few dollars a day and somehow manage to save fifty percent of their income?”

“Meanwhile, as this country spends a huge chunk of its resources building schools and bridges in Iraq, China is undergoing a massive military buildup, even purchasing offensive weapons to be deployed near Taiwan, a nation we’re pledged to defend?”

In the fourth panel, he looks over at Rat and Pig, the stars of the strip, and asks, “I don’t mean to be a Chicken Little here, but man, isn’t that all a little worrisome?”

In the next panel, Goat looks at Rat and Pig. Rat and Pig look blankly back at Goat.

Rat turn to Pig and asks, “Did you see ‘The Apprentice’ this week?” Pig’s face lights up. “Did I? OF COURSE I DID!” 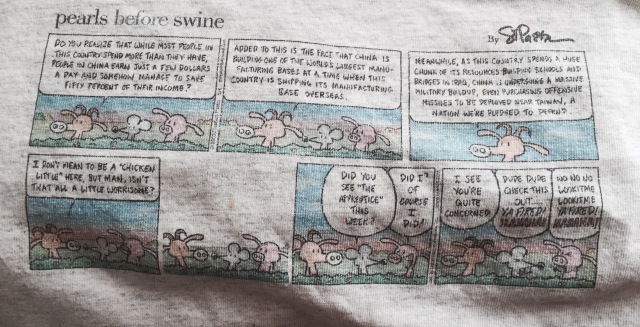 no sock monkeys were harmed in the making of this blog.
View all posts by gary →
This entry was posted in margarine and tagged art, dick cheney smells funny, life. Bookmark the permalink.