save the last glass for me

I met Mo  21 years ago today, give or take a holiday or two. It was love at first sight, though it took her another 15 years or so to come around. (just kidding. she never really came around.) We were instant best friends.  I  thought it was just the stuff you see on TV. Although mostly I saw the Three Stooges and I Love Lucy. And I would never wear matching jammies. But still.

Back in those early days, I remember one day she excitedly opened a box to show me the contents. Inside were 16 cow glasses. I was amazed not so much that they were cow glasses — I’m a West Texas boy, after all — but that there were SIXTEEN GLASSES! SIXTEEN! And she was just one person. Being almost as reclusive as me, what would she do with all of them?

And then I found out.

I spent the next 21 years breaking them for her.

The weird part is that I love these glasses. They’re great glasses, sure, but mostly it’s because they’re one of the earliest things we shared in our relationship, and they’ve been with us through the entire journey.

Along the way, they have fallen victim to unfortunate accidents. I suspect it’s because they’re right-handed glasses and I’m a lefty. Or maybe because I’m a dreamer and can’t be bothered with the basic physics of the inability of things to float. OK, dammit, I’m clumsy. There. you happy?

There have been accidents over the years, but you don’t really notice. It’s like the NFL. You bring out a stretcher, politely applaud as the broken player is carted off the field, then resume the game.

Last night as i was sneaking the last slice of pecan pie, there was a crashing sound. I had no idea what it could be. CERTAINLY not the cow glass I had left perched halfway off the counter. The weird part is that there was no reason for it to take a dive. Mo decided it was Ma sending me a sign to shape up. I liked this reasoning a lot, since it totally shifted the blame away from me.

But then I realized. We’re down to our last glass. What to do?

It would be horrible to be left with none of the original glasses. My first reaction was to guard it. Put it on a shelf or in a box or in the back of a cabinet wrapped in bubble wrap. But then I figured what the heck. Isn’t that life? Nothing lasts forever. Love it while it lasts. Everything gets broken. Glasses, hearts, the beer mile record. Life is worth the risk.

But i’m keeping it in the middle of the table. Just in case Ma is trying to send me another message … 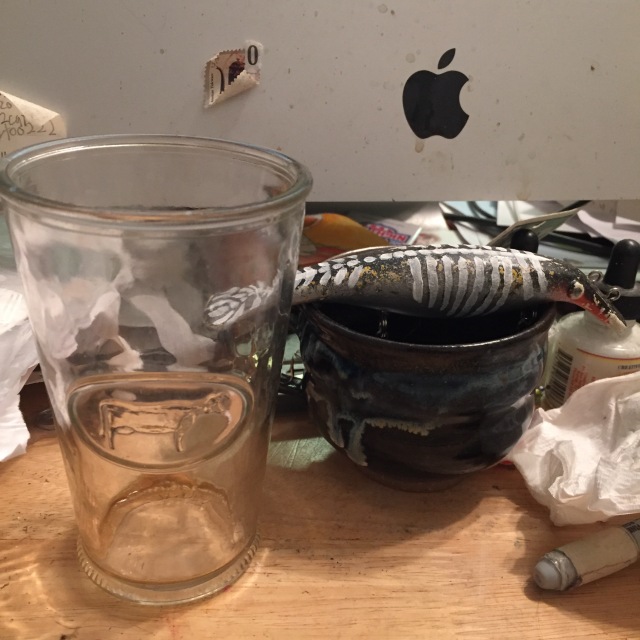 no sock monkeys were harmed in the making of this blog.
View all posts by gary →
This entry was posted in margarine and tagged life, marriage, yellow brick road. Bookmark the permalink.

5 Responses to save the last glass for me