a pirate looks at 60

Yes, I am a pirate two hundred years too late.
— the prophet jimmy buffett
—

if you had asked young gary if he thought old gary would make it to the big milestone, he would say “LIVE UNTIL I’M 40? NOT LIKELY!!!!”

so i feel a bit apologetic to tell him that we’re running past the 60-year marker  with a pile of running shoes that cost more than young gary earned in a year. journalism wasn’t the cash cow back then that it is today.

i didn’t have much of a plan in the early days. i just loved to run, so that’s what i did. 5ks led to 10ks led to marathons led to ultras led to crazy ultras led to marathons led to 5ks led to pleasant strolls along the bay. but the one thing that stayed the same over the years: there’s never been a day in the past 37 years that i haven’t had the urge to pull on a pair of shoes and go find some joy. what more can you ask in a lifetime?

i don’t know for sure what young gary would say if we met up at a race. hopefully he’d be satisfied that we’re still lining up after all these years. and i’m still looking for the perfect pair of shoes. and driving two hours next weekend for a 5k nobody ever heard of. maybe we’d get along.

mostly, i think he’d like that i’m still looking at those trails and thinking, “man, i’ve got to run that.” and i will till i die. we’d be good running partners. come to think of it, i guess we are. i never quite got around to growing up. running will do that to you.

On to the seventh decade … 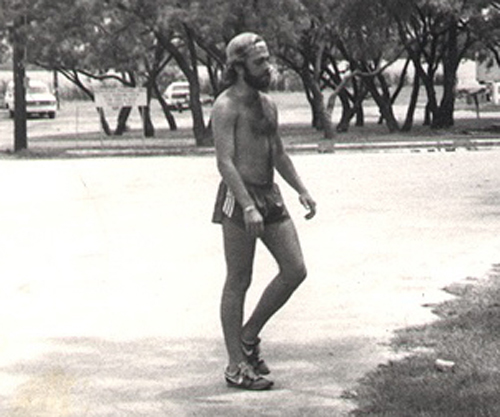