It wasn’t a flute, dammit 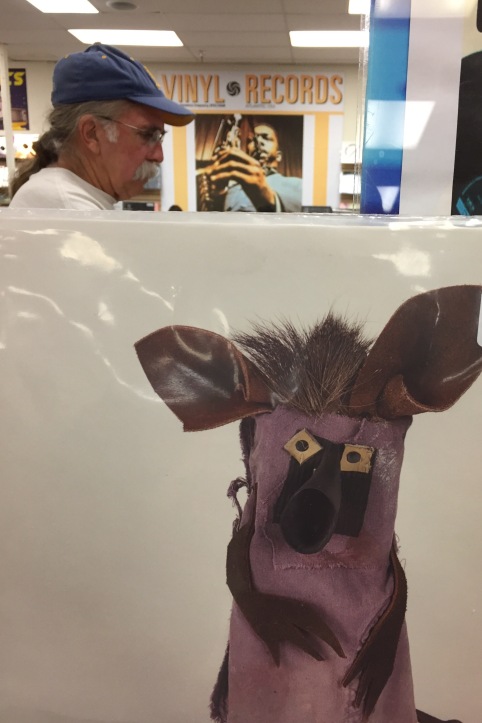 Sometimes I supsect Mo has a surveillance device in my brain. I have been thinking a lot lately about returning to vinyl. Not so much because of the sound quality or the warmth or analog vs. digital. I just miss holding records.

I miss that feeling of peeling off the wrapper, pulling out the brand-new black disc and moving the cartridge over. The hypnotic spinning. I miss liner notes and album covers. I miss the pause in the middle, and I miss that sound at the end. I miss records.

I haven’t actually owned a stereo in a couple of decades, which I guess is odd because nobody on the planet loves music more than me. Having been an apartment dweller who works nights, headphones make more sense. I had lost touch with all my vinyl during a series of downsizing experiments, then jettisoned the CDs once spotify that I could have every song ever created for 14 bucks a month. The sound is OK, I guess. I’m in it more for the ideas than the technical aspects. I even listen to the iPhone a lot with its little built-in speaker, pretending I’m 8 again and listening to my transistor radio. Maybe I had a transistor radio?

I had been looking at turntable/speaker combos on the interwebz when Mo made the record remark. So I piled the family in the car and we went to the store that sells such thing. Except they sort of don’t.

We found a barbecue grill/baby stroller combo and Mo was smitten with a wool cap since it was 95 degrees today, but no suitable turntable. They have karaoke machines and five-way things for your TV and little boom boxes, but not just a basic turntable/combo. They actually had the one I had looked at online. It’s a Klipsch, very hip. Surrounded by industrial steel and old wood, complete with tattooed twentysomethings in leather chairs. This is exactly how I picture us, except for the steel and wood and tattoos. I asked Mo what she thought. She just gave me the “bless your heart” look. And that was that.

But then a funny thing happened. We went to Zia’s which sells new and used stuff. I picked up and old Crosby/Nash album I once owned. I remember that cover, that feeling when I first got it. It was exactly the way I thought it would feel. I must have this.

But as I looked around, I realized just how hard this would be. Some are $1.99. Does this mean they’re hopelessly scratched or just wildly unpopular. Some are 10 bucks, about what I would expect to pay for a used record. But then I saw that new ones are $20. TWENTY BUCKS FOR AN ALBUM WHAT THE HELL IS THIS? But then I remembered. When I bowed out of the CD buying business, I think they were 16 or 17 bucks. So 20 would be about right. And isn’t that worth it to support musicians? The system is hopelessly screwed up and I realize my 3 cents for their share wouldn’t be much. But it’s something.

But the whole thing’s so complicated. There was a copy of Jethro Tull’s “Aqualung” on the wall with a $100 price tag. Why? It looks like a normal album. And a lot of the old classics were 30 or 40 bucks. But here’s the third Beatles album for $8. And it’s impossible to find stuff. Sorted by genre. Is wilco rock or country or americana or pop or does it depend on what mood Tweedy was in during the particular recording session? And it’s a small store. You can’t possibly have everything. And if I’m buying from scratch, what will it be? Neil Young’s On the Beach? Joni’s Hissing of Summer Lawns? Rundgren’s Something/Anything? These are all albums I could not exist without. If only there was a better way. And then I realized there was.

So as I type this I’m listening to the Jethro Tull (aqualung and thick as a brick.) Which is sad, because it makes me think of the thick as a brick cover that’s a newspaper. You don’t get that on spotify.

Is the quality as good? No. Am I screwing over the artists. Probably. Am I relieved that I don’t have to think about turntables anymore. Oh, yes.

I love the past. I love that memory of unwrapping pink floyd’s wish you were here. Standing in the driveway with the cutouts from inside the sgt. pepper’s album. The feeling of pulling out an album from its little home and placing it on the turntable.

But I have pretty much every song I’ve ever loved in my pocket. I suppose that’s an acceptable tradeoff.

Maybe we can go to Zia’s once a week just to hold them. And if I come across Hissing of Summer Lawns cheap, it wouldn’t take up much space.

no sock monkeys were harmed in the making of this blog.
View all posts by gary →
This entry was posted in margarine and tagged art, life, music. Bookmark the permalink.

3 Responses to It wasn’t a flute, dammit