I recently asked people to share their most memorable race, as a participant or spectator, live or televised. My friend Maura wrote the following. It’s so perfect (except I’d go with the Pete Seeger version of “little boxes”) that I had to share. What a great memory …

I haven’t run any races in a long time. I mean, a really long time. There are no Boston qualifying marathons, epic 100 mile trail races or even a slow 5k anywhere in my distant past. So when I think back to races I’ve watched or run in, I go back to the Chicago Marathon.

I had just entered middle school when the first ever Chicago Marathon was run. I don’t have a detailed memory of the day, just bits and pieces and a general remembrance of the mass of people (there were over 4,000 runners!) and how cool it was to be there. Our cross-country coach decided that it would be a great experience to have the team volunteer at an aid station. He was a good guy. Loved running and just wanted to share that love with us. He must’ve been a saint or a little mentally unstable, taking 20 or more of us downtown for the day. But that was a time when schools didn’t spend a lot of time worrying about lawsuits and I don’t remember anyone dying (I’d remember that, right?) so it all worked out.

We were stationed at the 20 mile mark and tasked with handing out water. Did they have other fueling? I don’t know. While I would love to know now, it must not have seemed important to me at the time. It was a beautiful day and as a suburban kid there was nothing more fun than hanging around in the city with your friends. That’s what I remember. So much excitement, energy and diversity that didn’t exist in the suburbs (cue Malvina Reynolds singing “Little Boxes”).

The runners took forever to get to mile 20. We waited, filled water cups and goofed around, probably got yelled at a few times. It’s funny, I don’t remember the leaders coming through. I’d like to think I watched and was in awe but when I try to dig up that memory it is filled with other marathons, much later, when I was much older. When I had an understanding of how fast they are really running, what it takes to run that fast and then just watched in amazement. What I do remember is when the regular runners came. I had watched cross country and track meets but I had never been to a road race this big before, and it was pretty inspiring and terrifying as you saw people pulling up, limping, puking and some just generally looking miserable as they came through the station. I remember being taken aback by how many people were walking through the water stops. Did they forget they were in a race? I had no concept of the toll 26.2 miles can take on a body. I had never heard of the wall.

We had a college-aged family friend who was running it, and I remember being shocked that she stopped at the aid station and spent a few minutes talking to me. She was exhausted, limping and as she took off her shoe, I saw blood seeping through her sock. She got it bandaged and then went on. I was focused on how long she stopped. Minutes lost – you are racing!

There were so many people like her that trudged on, in pain, spent, but determined to finish. Could I comprehend at all what it took for them to finish? The day was long. I don’t remember, but I like to think that we cheered as loudly for the people at the end of the pack as we did for the leaders. That we had some understanding of the sacrifices it took for them to get there and the determination it took them to run 26.2 miles. But we were 12 and I (at least) was not particularly introspective or empathetic, so probably not. It did make me want to run a marathon (of course, I wouldn’t walk) and I always figured I would one day. Hasn’t happened yet, but as a friend reminded me awhile back, Ed Whitlock ran a sub 4 at 85 – so I’ve got some time. 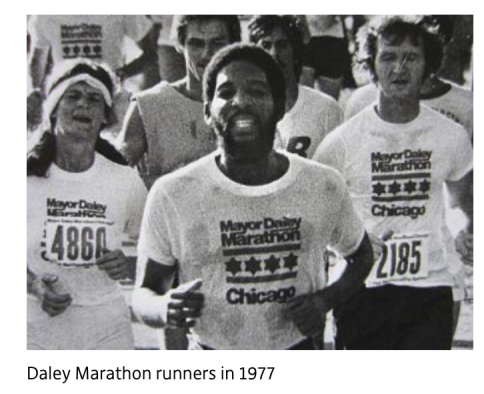 3 Responses to the first chicago marathon