once upon an eclipse

i never thought much about what it would be like to watch an eclipse when you’re blind. But there he is.

He’s standing with a guy from the hospital who’s giving him a blow by blow of the scene. The entire medical staff appears to be in the parking lot, peering through 3-D glasses, X-ray film and looking at cardboard boxes. It’s like being in the playground at third grade except they’re allowed to attend in pajamas.

The man looks to the sky in the sun’s direction, sunglasses covering eyes that no longer work. He can feel the sun on his face. Can he tell it’s getting cooler? I can’t tell a difference, but maybe it’s a sensory thing.

They stand to the side of the driveway, on the fringe of the party. The minutes pass.

“It’s darker now,” the guy tells him. “I think we’re there.” The blind guy smiles.

I back away, not wanting to intrude further. What must it be like to be blind in a solar eclipse? I would be shaking my fist at the cruel god who wished this upon me. But not him.

He stands transfixed, gazing upon the phenomenon taking place before him that he can’t see. Or maybe he can. The mind is an incredible tool.

After about 15 minutes, he quietly tells the Mayo guy, “OK, let’s go back inside.”

Thirty minutes of darkness for us. A half hour of sunshine for him.

I guess it depends on how you look at it … 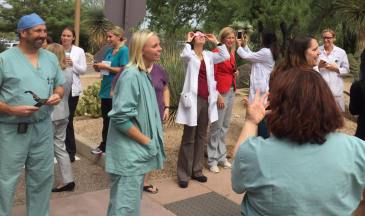 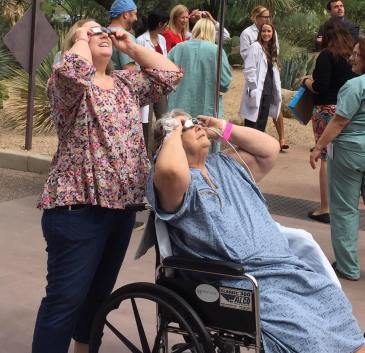 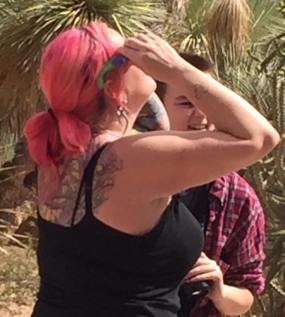 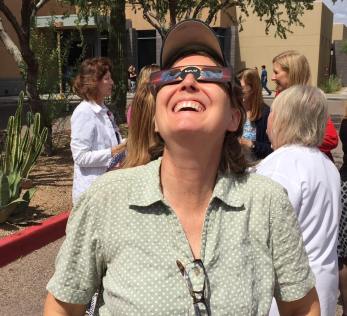 no sock monkeys were harmed in the making of this blog.
View all posts by gary →
This entry was posted in margarine and tagged life. Bookmark the permalink.

4 Responses to once upon an eclipse