the art of racing in the rain

“There is no dishonor in losing the race.
There is only dishonor
in not racing because you are afraid to lose.”
— the prophet garth stein
—

You can’t get there from here. But maybe you can get somewhere else.

What was it that brought me to running in the first place? That Michael Douglas “Running” movie? Um, not that I will admit. Uncle Bob’s Tigers? Maybe. Picking up chicks? Yeah, right. No, the thing I always loved most was racing.

I dug out the old log this afternoon, and I realized what I was missing. I used to race a LOT. 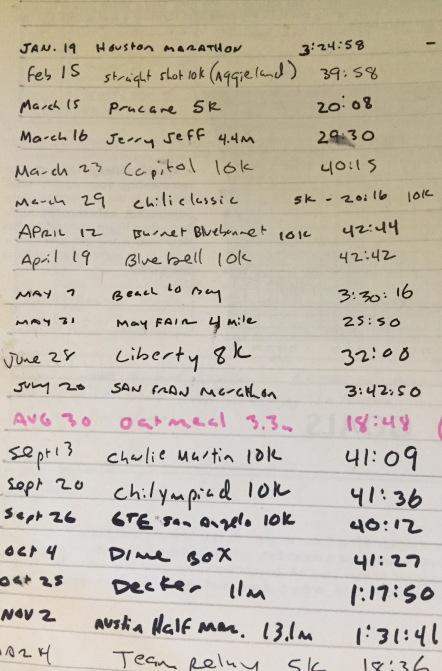 I loved races. Little 5ks, massive marathons. Chili cookoff runs measured by two drunk guys in a jeep, little races held in town squares before the city festival, anywhere there was a starting line, so was I. It’s the most fun I’ve ever had.

What happened? Life, moving, slowing down, the futility of spending money to mosey at 15 minutes a mile. But then it hit me. Why the hell not?

Today I called up the race schedule and whipped out my terrified credit card. My first rule was no more than 30 bucks per race. That lasted about three minutes. Apparently 5ks now have to come with medals now. When did that start? And an extra five bucks if you don’t sign up a year in advance. And a service fee, because, um, there was a service. Isn’t service what you buy with the entry fee? Harumph. And a guarantee fee. I skipped this one, but apparently they now offer a guarantee for an additional $35 so that if you miss the race, you get a $35 refund. Runners aren’t that great with math.

I just closed my eyes and hit buttons till I was signed up.

When the smoke had cleared (who knew oatmeal is flammable?), I was signed up for three races in the next month or so, all close enough to home that I can  make it from work to the race and back to work again without having to wake up, a huge plus since I work weekends (who knew daily papers came out on Sunday and Monday?) Nowhere did I say this would be a good idea. Yes, I clicked on the virtual waiver giving my virtual signature to clear them of virtual responsibility.

There’s the Free Spirit 5K, which sounds goofy but is held in the memory of a guy who had leukemia, twice, and it got him the second time. What better cause could you ask for? That’s followed by some fat turkey trail run. Are there thin turkeys? And then the Scottsdale Half Marathon/5K, which will be another “only” run. “Oh, I’m only doing the 5K.” Upside: downing all the beer and pizza while Serious Runners are still on the course. Downside, that work thing. I will have to check to see if working while drunk is OK. You never know. Some people have no respect for journalistic traditions.

The last one I entered is Dec. 10. I figured I would sign up through then and see how it feels. If it’s fun, I’ll sign up for another trifecta and then just keep going till it hits 130 here and the race schedule goes into the summer siesta.

Will it suck to be last? Nah. I started out last. I might as well finish there as well. That weekly ritual. Shivering in line waiting for the packet. Desperate wait for the portapot. People-watching for an hour. Suffer for a half hour, and then lie in the grass on a sunny day basking in the pain of everything hurting. I love that feeling.

Is this silly? Heck, yeah. That’s the whole point. But the only dishonor is not racing because you are afraid to lose. I’m afraid of a lot of things these days, but this isn’t one of them. It’s racing season.

Maybe you can’t get there from here. But I’m going to go take a look.

We can’t have everything we want, the prophet Stein said. Sometimes, we simply have to believe.

no sock monkeys were harmed in the making of this blog.
View all posts by gary →
This entry was posted in Uncategorized. Bookmark the permalink.