Posted on December 31, 2017 by gary
So this is the new year
And I have no resolutions
For self-assigned penance
For problems with easy solutions
— the prophet ben gibbard
—

If I had a credo, that would be it. Although if I had a credo, I don’t think I would like hanging out with Scott Stapp. Maybe a motto instead. Mottoration in all things. But that’s not why we’re here.

You know it’s going to be a bad race when you park next to a guy in a $2 billion red Mercedes sports car with a “Run4ever” custom license plate. If you’re running forever, why are you racing a crappy 5K in Peoria?

The best part of the race was the ducks. There was a band of vigilante ducks who seemed to truly enjoy blocking traffic. They just waddled along the stripe, oblivious to the cars. The race would have been a lot more fun if they’d participated.

I have come to the realization that 5Ks are dull here. Dull people, dull courses, dull weather, dully dully. We ran out. We ran back. We had a banana and a bad announcer. Boring old white guys standing around looking at each other. It was not fun. Except for one puppy who appeared to be in his first race. There is much joy in a running puppy.

The funniest part: The race directors didn’t even try. The gaudy finisher’s medal that all 5Ks seem to have now was thrown in the goody bag before the race. So you don’t even get that satisfaction of receiving a medal as you cross the line. They should have just mailed me the package so I could sleep in.

I managed to run 42:21,  my slowest time yet in the YoF. How is that even possible? I resolve to get faster. That’s my self-assigned penance.

Or maybe just hang out with the ducks blocking traffic. And I must learn that Secret Happy Dance.

On to the next year … 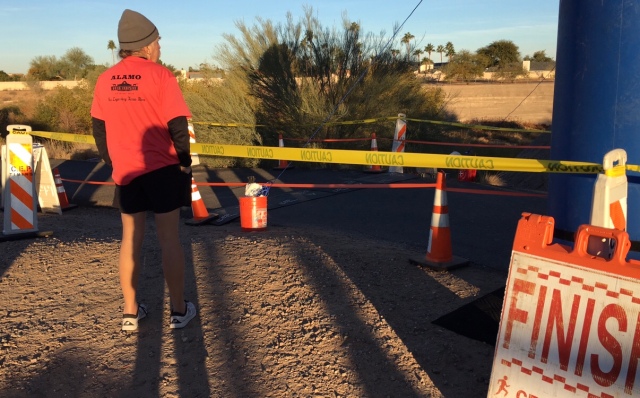