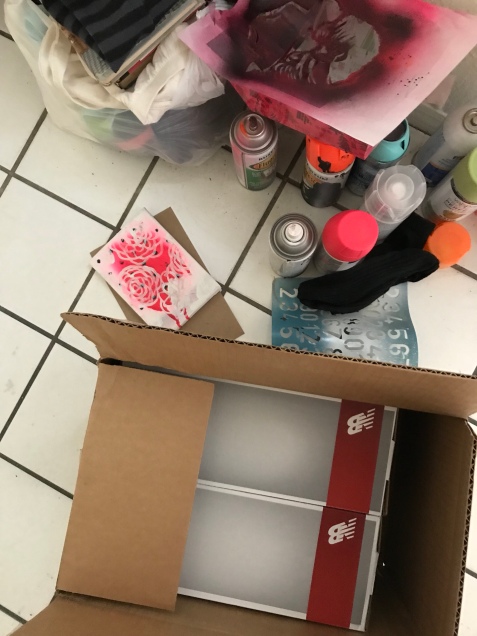 They’ve been sitting in hallway for a week, hanging out next to the Smokey Bear stencil and some suspicious spray paint. Two shiny pairs of asics zantes. The foam is so fresh you can almost smell it. Well, I have a cold or something so I can’t smell anything, but still. With my infamous shoe collection stench, the inability to smell is a huge plus.

I bought them because they were 43 bucks each and wouldn’t be at that price for long. I just started running with my last pair of Zantes and I seem to get about a million miles out of them, so the shoes may be a hallway fixture for a while.

Letsrun has been on a blah blah rant about how only suckers buy trail shoes. But lugs and rock plates!!! Shoes with less padding, shoes with more padding, shoes to bring out the color in one eye or the other. Our closet is testimony to the problem. You can’t have too many shoes. 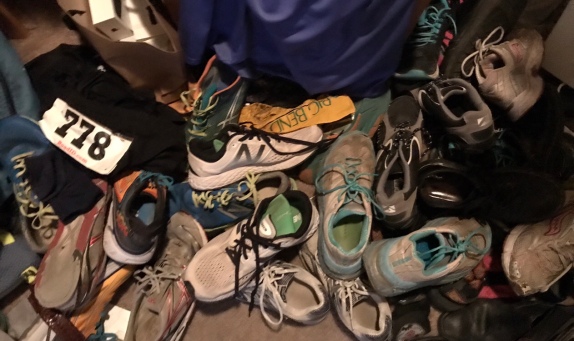 Mo drives me to work now and then. It’s about a seven-hour jaunt from our place to work, and it’s nice to have company. She then wanders around downtown Phoenix shooting murals and peering through the windows of art places and possibly painting Smokey stencils on corporate buildings.

A million homeless guys live downtown. When she picks me up late at night, she parks next to two guys who sleep on the little grates on the sidewalk because they’re warm. It’s jarring when you see them the first time. You’re 5 feet away from a grimy guy who has nothing in the world except a dirty blanket and a bag holding all his life possessions. The fine line between a homeless guy and a runner in a 100-mile race.

But still, she’s been haunted this week by the image of one many. He’s a really big guy. Disheveled. Six layers of shirts. Pushing a shopping cart. One shoe is on. The other shoe is tattered and flops around. His heel is hanging out. She says he must be walking all day, because that’s what homeless guys do.  She wants to buy him some shoes, that one small thing you can do in a world where you can’t save every puppy.

She’s been looking for him since, but she never saw him after that first day. Maybe he’s next to the plaza that society spent so much on while neglecting the poor, she says. She has devised a plan. When she sees him next, she asks him for a shoe size. Then she sets up a meeting place for the next day to deliver the shoes. What kind, I ask. I don’t know. Shoes, she says. The important thing is to try.

I run through the possibilities. He seems like a minimalist. But he likely covers long distances. Maybe he could use some Zantes. I seem to have a lot of them these days.

Maybe I’ll be there someday. I’m in a profession that has lost 60 percent of its jobs in the last decade. Homeless guys weren’t always homeless. I’e been laid off twice from dying papers. It happens. At least I’ll always have shoes.

I hope she finds the guy. I hope she gets him shoes. I hope I eventually stop feeling bad about those two pairs sitting in the hallway …