the sky is gray, the sand is gray, and the ocean is gray

It started out innocently enough.

My left knee was bumming a little bit. Nothing serious, just that nagging can’t move it without intense icepick thing. The easy solution: New shoes.

For runners, new shoes are the equivalent of rebooting the computer. It may or may not work, but it’s easier than coming up with an actual solution.

I had ordered two pairs of shoes a while back, and they’ve been sitting in the hallway patiently waiting their turn, the Nick Foles of zapato nuevos. I had never opened the box till today. No idea what color they were.

And then I found out.

My mind flashed back to the old days. Gray New Balances were a thing for a certain group of runners. Mostly rich guys who didn’t mind spending $150 or so (roughly $16,000 when translated to 2018 equivalent) for heavy shoes. You probably had to be there.

The Holy Trinity. Bill Clinton, Bill Gates, Willie Nelson. What did they have in common? They all wore those gray New Balance. And now they’re all dead. A Bad Sign.

I opened the second box, hoping for a Festivus miracle, but of course it’s mid-February so it’s a bit late for a list of grievances. They were gray as well. “I feel right at home In this stunning monochrome Alone in my way,” the prophet Ani said. But I’ve never seen her in gray New Balance. She’s still alive.

And so I went out with the new shoes. I walked a mile in hopes things would loosen up. They did not.

No big deal, I guess. It’s been a long time since I’ve had problems. And it’s only one leg; the other one’s fine. Half-full glass, you know.

I’m sure things will be fine. Just a goofy little ouch. Maybe injuries are a good thing. Means you’re training.

Mostly, I need to get past that feeling of being the old guy in gray New Balance. Youthful elitism dies hard.

I just hope I don’t join the Holy Trinity in dying as well. Maybe I can get Mo to spray paint them. 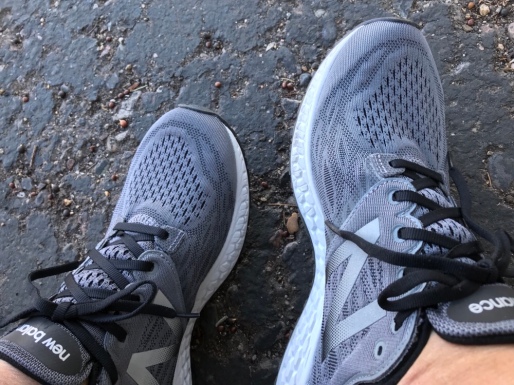 3 Responses to the sky is gray, the sand is gray, and the ocean is gray