never turn your back on a champagne cork

It started a few weeks ago. Mo walked into a door at work. No, really. Big black eye. It’s an odd thing these days. You worry that people will look at her, look at me, and shake their heads. I would point out that I love my wife more than anything on the planet and would never do anything to harm her. Plus, she is WAY tougher than me and would totally beat the crap out of me if I tried. But still people don’t know that. Eventually, the eye healed and we went on with our lives. Until today.

Longtime readers will recall that the main gate to the track has been locked lately, as well as the other gate, and even the secret third gate. Today they upped the ante. Upping the ante being the kind of poker talk we guys who hit our wives say. They locked the big metal gate that you have to go through to get to the other gates. This appears to be serious. No fence hopping.

So we set off on the little dirt road that goes around the college. As we’re moseying along, Mo points nervously to the left. The resident coyote is standing at the edge of the field on the side of the road.

My life flashes before my eyes. I’ve never been eaten by a coyote before, and it’s a very hot day today, so it seems like a bad time for a debut. But the coyote looks like he’s hot too, and wanders away into the field, occasionally looking over his shoulder in the hopes that I will start screaming like a little girl. I don’t give him the satisfaction. Mo, meanwhile, is snapping photos and commenting on what an adorable color he is. Did I mention she’s way tougher than me? 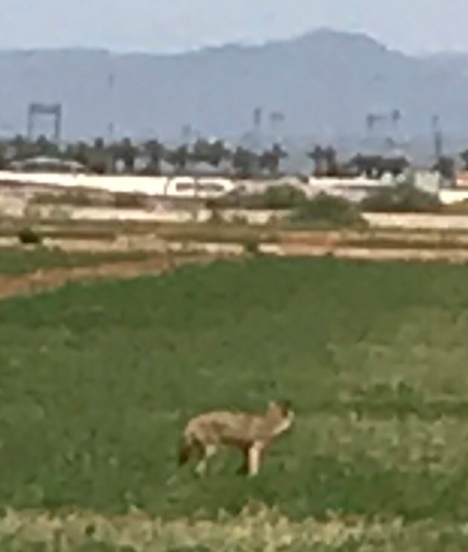 We finish our loop and plop down on a picnic table in the shade overlooking the track. Almost immediately, a guy comes by on his way to the secret gate. We snicker, knowing he’s out of luck. But then we watch him leisurely hop the fence and set off on a loop. Minutes later, a cart comes by. The guy is gone a half lap later.

We linger a few more minutes as I try to crop an incriminating letter showing that Niece the Younger tried to kill Niece the Elder when they were young, a suitable offering for Siblings Day. Four more guys come by. They’re big football guys. Again, over the fence. They head into the back stretch and out of sight. We never see them again. I assume they were tased.

But that’s not why we’re here. We are here for this. As we walk back toward the car past the tennis courts, Mo is intently watching two tennis players volleying. In a former life, Mo was a serious tennis player. As I near the turn, I hear a BANG. Mo has walked into a metal pole. She nailed the right eye, yes, the same eye that only recently stopped being black. So now she will be parading about with ANOTHER black eye suffered on her day off with her hubby. I am going to jail for sure. 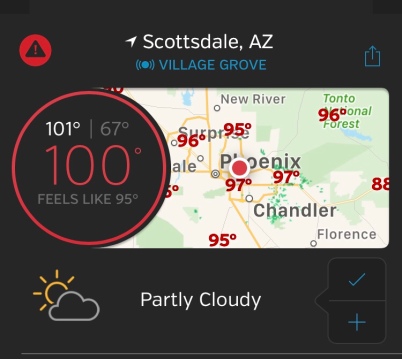 Bottom line: It’s not even mid-April and it’s already 100, the track is off-limits, and I’m going to spend the next week saying Mo was in a terrible champagne cork accident.

Maybe a coyote attack won’t be so bad …