a drink a day keeps the shrink away

He has the shot put out now. I’m reminded of the old saying, “Always keep your eye on an elderly guy throwing a cannonball.” This is why I love the track.

He’s an unapologetically old decathlete. Braces on both knees, Nike spikes, two bags of all the junk decathletes need to decathle. That might not be a word.

What kind of dedication does it take to work on your long jump when you’re in your seventh decade of running the mile? What inner voice is urging you to torture yourself on an April day? Why devote yourself to something that requires so much work? And hauling around a shot put?

That’s the thing about the track. It’s a magnet for the True Believers.

A punter and a long snapper are working out. They have 10 balls. The snapper snaps, the punter punts. They do it 10 times. They trot down the field, gather the balls, and do it again. Ten snaps. Ten punts. Trot. Over and over and over. They’re repeating this ballet the entire time we’re at the track. You only see the result when you turn on the TV on Saturdays. You don’t see the sweat and intensity that goes into perfecting the art. Snap. Punt. Trot.

A guy is running mile repeats in Lane 9. Normally this would bother me, what with Lane 9 being my domain, but I am stricken by the oddity of it. He’s crazy fast. Why is a crazy fast guy running mile repeats in the outside lane rather than in the designated Fast Guy Lane 1? Maybe because he has his fueling station on a table next to Lane 9. Blue Gatorade and a Rockstar energy drink. Breakfast of champions. Mile after relentless mile. That’s what the track is for.

It’s sad. The security cop tells us the Powers That Be are headed toward shutting down the track for public use. Maybe liability issues or budget cuts or the fallout of a dickhead coach who was holding an illegal kicking clinic on the field and caused a major scene. The security guy says he thinks maybe May 1. It’s stupid, he says. People pay taxes. It should be everyone’s track. He shrugs and rides off on his bike.

What happens to the people for whom this track is home? From the Olympic decathlon gold medalist to a hunched over old guy in a big floppy hat, I’ve shared this track forever with people who come to the little oval for mysterious reasons. It’s like the mountain in “Close Encounters,” a force that draws you there for the energy and the views and the solitary glory of chasing your dreams, however silly.

It’s the refuge of the Flagstaff guys coming down from the snow. Fast guys from the northeast on spring break. Countless football players hoping for a shot at the NFL. For gazelles, for walkers, for runners, for humans. It’s our world.

“Sentiment without action is the ruin of the soul,” the prophet Abbey said. But I’m old and tired and anarchy seems like so much work. I don’t have the energy to make it past 5K these days, much less take on a faceless bureaucracy.

“When a man’s best friend is his dog, that dog has a problem,” Abbey said. Which has nothing to do with this post. I just love that quote.

Oh, yeah, the track. I guess we’ll celebrate while we can. And if it happens, it happens.

But damn. I love this track. 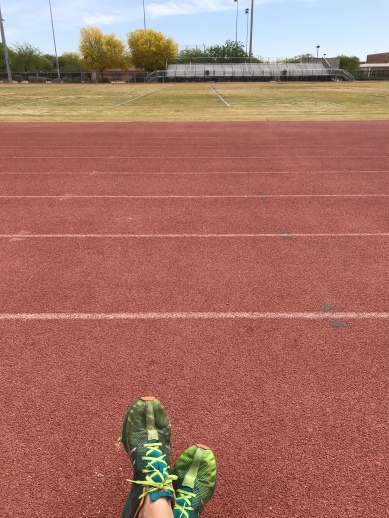 no sock monkeys were harmed in the making of this blog.
View all posts by gary →
This entry was posted in running and tagged life, running, track. Bookmark the permalink.

2 Responses to a drink a day keeps the shrink away