“Did you ever walk the kids to school?” Mo asks Rick as we’re out on our afternoon trek. “What was that like?”

I didn’t expect much of an answer. Rick sometimes has a hard time finding the right words these days. I can feel his frustration. He talks with me a lot, I guess because he doesn’t worry about not being able to finish a thought when he’s with me. I’m a goofball. We can both shrug and go on to the next thing. But he’s increasingly quiet around people, fearing embarrassment. What will he say to Mo?

He looks off in the distance. “It was scary,” he says. “You walk with this little person, and then you have to let her go. It’s hard.”

He drifts away for a minute. Maybe remembering those days, maybe just thinking. Sometimes it’s hard to tell. “It was scary,” he says. It’s vintage Rick, honest and poignant and profound and saying so much with just a few words. Mo and I walk along silently, awed by that moment.

We’re in the midst of a solid week of storms that would make Gen. Rainz proud. We have our pre-storm ritual down. Lucky the dog  is terrified of thunder, so when the storm gets near, Mo cinches up his thundershirt. He then hides in a cubbyhole and trembles. Rick brings the other dogs in and we hunker down. He brings out shredded cheese to apply liberally atop the dog food, an apocalyptic treat. If you’re going to die in a storm, do it while eating cheese, I suppose.

We stay up with the dogs, watching the lightning, not so different than those nights with Granddad out in Vancourt when we were kids. Watching the sky, seeing the bolt and jumping at the crack of thunder. It’s an entertaining show, the kind people enjoyed before 200 channels came along and made us stop looking outside.

We begin each day with Cheerios and end it with Klondike ice cream bars, a ritual that has become a tradition during my visits. And, of course, we walk. He tells me about the history of the homes in the neighborhoods. We take Mo to the Lone Wolf and Endless Love and the waterlilies. We go out for strolls with Mike, who has just undergone heart surgery but is already leaving us in his dust. And we go out in the evening, just the two of us.

It has barely stopped raining, but we can’t wait. There are branches everywhere from the previous night’s storm. We hop puddles, sometimes making it, sometimes laughing as we land in the middle of a pool in the intersection. We dodge the splashes from white F-150s coming too close. The air has that fresh, magical smell that you don’t get very often in the land of the prickly pear. He’s quiet. I’ll say something. He’ll respond, “oh, you know.” I always wondered where I picked up that phrase. And funny. I do know.

I’ve been reading Kerouac’s “On the Road” for the millionth time during the trip. That’s how I’ll always think of Rick. A latter day beat poet who fearlessly set out to discover Texas, one mile marker at a time. He talked to so many people, saw so many things, wrote so many stories. I’m honored I got to be in some of them.

You go through storms. You put on your thundershirt and hope for the best. You never know. Even on a cloudy night, there’s a very blue moon up there somewhere. You just have to look hard, imagine, remember, hope, pray. Maybe eat some shredded cheese.

And these days I know exactly what he means. It’s scary. You walk with this person, and then you have to let him go. It’s hard.

I love you, pal. Even if you ate the last Klondike bar after you thought I had gone to sleep. See you next time. 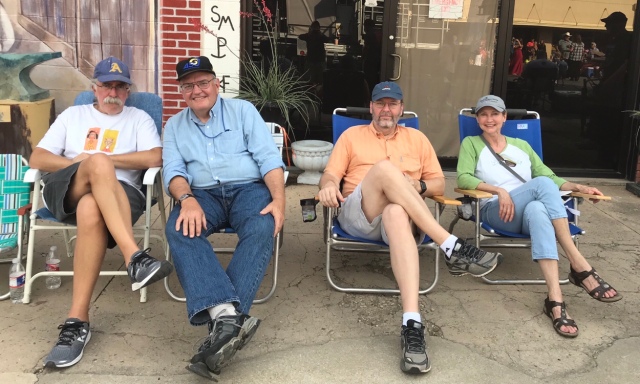 no sock monkeys were harmed in the making of this blog.
View all posts by gary →
This entry was posted in margarine and tagged brothers, happily ever after, life, texas, west texas waltz. Bookmark the permalink.