owl be home for christmas

We’re loading the car in the deep, dark Pacific Northwest.  It’s a little before 4 a.m. Not a creature is stirring. And then Mo spots a creature that is not stirring.

It’s sitting on the roof across from us. And it’s huge.

The street is dark, which is apparently what happens around here a little before 4 a.m. But we can see the silhouette clearly, and some sort of animal is perched on the house. I assume it’s watching us.

It looks like maybe a big owl. Mo says it has to be a large cat. But cats aren’t this big, and it appears to be on its hind legs. It looks like an owl to me, although I’m more used to the burrowing ones who hang out on the running path, and not these monstrocities that apparently grow in the PNW.

It doesn’t move as we load the car, so I’m guessing it’s not in attack mode. We stare a while longer, and then I make my move.

Newly emboldened by having asked wedding guests to move forward the previous day, I flex my newfound leadership skills and walk out into the street. I creep forward quietly, step by step. I’m wearing Piranhas, so my stealth strategy is flawless. I get almost to the curb, and then I can see it.

It appears not to be interested in attacking us, but you never know. We gingerly shut the doors and I drive slowly past with the lights out.

We drive down a small country road full of foreboding shadows before finally reaching the bright lights of the freeway, where any wildlife is summarily flattened by 18-wheelers. We board our plane and get the heck out of this strange land.

People really should keep their satellites on a leash. 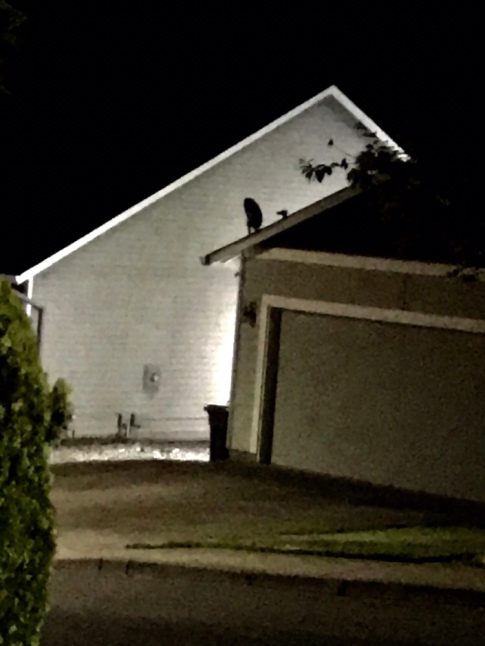 no sock monkeys were harmed in the making of this blog.
View all posts by gary →
This entry was posted in margarine and tagged happily ever after, life, marriage. Bookmark the permalink.

2 Responses to owl be home for christmas