Who holds your hand
when you’re alone?
— the prophet patty larkin

I’m no expert on either, but given the choice of herding cats or keeping up with four little boys at the same time, I’m taking my chances with the felines.

We’re at the beach, and there’s not a cat in sight. But lots of boys.

We’re in the last evening of a weekend of honoring our niece Sarah. We’re preparing to float a small lantern with a candle in it, but the boys are totally missing the solemn nuances. They’re here for the adventure.

I must confess: I’m not really a kid person. It’s been a fun weekend watching the show in the backyard: They chase each other, chase the dogs, chase the basketball, get chased by the dogs, stop by the splash pool, eat the mango Otter Pops I had wanted, repeat until falling over asleep. It’s sort of like watching the Nature Channel except nobody gets eaten and they don’t switch to the treehouse guy after an hour.

But I’m purely a spectator. My closest encounter with kids tends to be Which Row on The Plane is That Screaming Child Going To Take Surely Not Back Here Oh My God NONONONONO Dear Mo I Was Just Kidding About Loaning You My Headphones.

But it’s a beautiful beach, and the kids are hilarious. The first one to arrive at the water is throwing rocks with abandon. No, I don’t actually know what throwing with abandon means, but it seems dramatic. Then we look up to see one of his shoes floating out to sea. He points proudly. I applaud his creativity.

There are four boys, ranging from maybe 2 to 4. I have no idea how to tell how old kids are, given they don’t come with any sort of “best served by” labels, and asking someone would require conversation. I’m not really a people person. Yes, this is a recurring theme.

They are loving the beach. There are feathers and clam shells and driftwood and crabs in various states of disrepair and So Many Rocks.

Marley, maybe the youngest of the four, brings me a rock. He sits it beside me and points. I congratulate him, not sure if it’s a present for me or if I’m to guard it. A while later, he brings another. No kid has ever given me this sort of gift before. I’m not sure how to reciprocate. I could give him my iPhone, the only thing I currently have with me, but what if he turns out to be one of those Android weirdos? I just tell him thanks. I’m honored.

The craziness goes on, and the sun begins to go down. I’m pretty much kidded out, so I go walking down the beach, looking for a better view of the setting sun and a little respite.

I look up ahead, and there he is. He has managed to make his way down the beach away from the group. I’m thinking it should be exciting for someone to catch him.

And then I hear those terrifying words:

“Oh, never mind, Gary’s getting him.” They have mistaken my escape for a rescue mission.

And so here I am: Mano a Kiddo. How do you even do this? My only experience is trying to corner the cat, who at the first sign of attention on my part goes under the bed for the rest of the day. But Marley gave me rocks. I owe him.

“Yo, Marley,” I call out. He looks up and stops. I catch up to him and stick out my hand.

He reaches up and grabs two of my fingers. I’ve only known him a couple of days, and even then I’m just the weird guy who hides in the corner of the backyard. But he’s just reached out and turned his life over to me.

I tell him it’s not socially acceptable to wander off from the crowd, hoping his cognitive skills are not yet at the point where he will realize that’s exactly what I was doing myself. I tell him his mom is worried, because that’s what moms do. I tell him we should probably get back, though I’m guessing at this stage of life he’s only hearing Larson’s “blah blah Ginger.” He just looks up with me with the biggest eyes I will ever have the joy of staring into.

And so for a few seconds, I’m his entire world. I’m the guy who has his back in a world that’s too scary for children. He’s counting on me to get him out of this. I just stand there looking down at him. How do parents do this? I’m terrified to have custody of this little bundle of humanity for two minutes. How do they take on this job for 18 years?

And then it hits me. This feels pretty terrific. A little guy to bring me rocks and sneak away and chase wet frisbees with a puppy. A tiny life to embrace and love as he grows into anything but a journalist. Dear Edward R. Murrow, please not a journalist.

He just stands there looking up at me. It’s up to you, he’s thinking. Get me out of this one and I’ll buy you a beer in 19 years or so.

I take a photo of that little face staring up, because I never want to forget that moment. After 62 years of being devoutly anti-children, I find myself wondering. What If.

We walk back, two pals hardened by combat. He hugs Mom and rejoins the mayhem, we launch the lantern, we go home.

The next morning, we’re at the airport. A woman with a screaming baby decides that standing 3 feet away from us is the best way to shut the kid up. I make scary faces whenever the kid looks over at me. I am not big on kids. I might have mentioned that already.

But then I pull up the photo of Marley on my phone. I guess a little screaming never hurt anyone. I’m going deaf anyhow.

I wish I had kept those rocks … 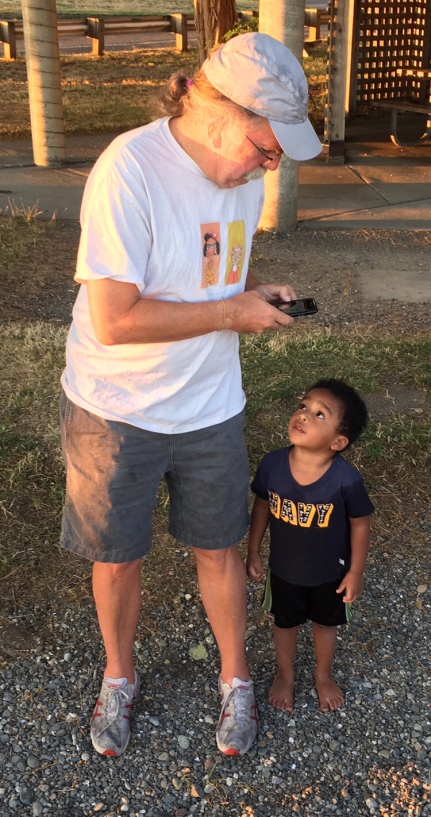 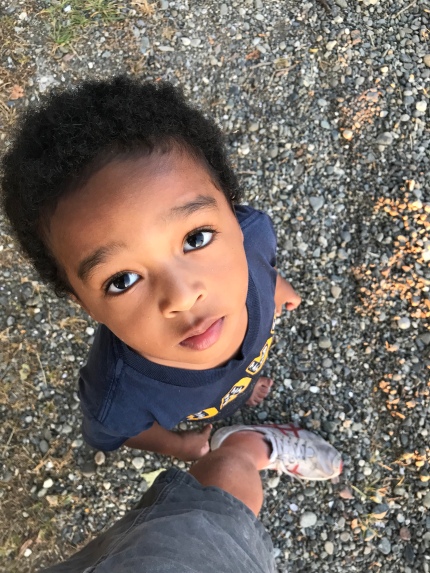 no sock monkeys were harmed in the making of this blog.
View all posts by gary →
This entry was posted in margarine and tagged family, happily ever after, life. Bookmark the permalink.