She stares into space while waiting for the man to finish his conversation and order. She has that look of someone who is too young to be doing this and way too old, both at the same time. The man is in no rush, as he talks with the elderly woman behind him.

“This is my pilot magazine,” he says, waving the periodical in a handful of mail he’s holding. “I get it every month. Mostly I turn to THIS page. It’s the obituaries. I go to this page and scan it to look for my name. If it’s not there, I figure it’s a good month.”

She waits expressionless as the man continues the monologue with his acquaintance in line.

“Four pilots in my class,” he says. “We always kept in touch. The other three are gone now. It’s just me.”

She doesn’t exist in his world. He’s standing at the counter and talking with another customer as if she’s not there. Her eyes are vacant; her emotions left somewhere that can’t be bought for 12 bucks an hour as the man rambles on.

She looks up across the McDonald’s. Her eyes light up and a huge smile crosses her face. She stares for a second, a rainbow of happiness on a cloudy day.

Then she reaches her hand up to her lips and subtly throws a little kiss in the direction of her glance.

Across the room is her little girl, maybe less than a year old. Peeking over the shoulder of  a man who is holding her, a little Christmas bow in her hair, she’s beaming at her mom. Her mom is beaming back.

If this were a Hallmark movie, the elderly store owner would be handing her a check for a million bucks and sending her off to happily ever after. But she doesn’t need it. She’s happy right now, this second, this lifetime.

The man finally realizes she’s waiting for his order. “Senior coffee,” he says. The smile is gone again, replaced by the resigned look of someone who’s taken too way many orders in a life that’s way too hard solely for the happiness of a little girl who’s way too cute.

She steps away to get his coffee. He  waits. The little girl and her dad leave.

“An octogenarian,” the man says again to no one in particular. “Imagine that.” 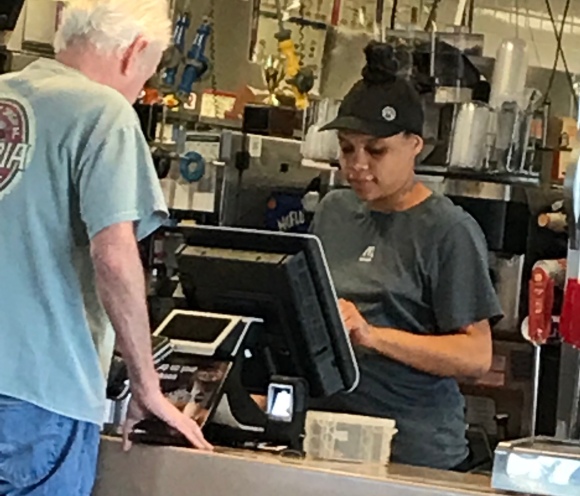 no sock monkeys were harmed in the making of this blog.
View all posts by gary →
This entry was posted in margarine and tagged happily ever after, life, yellow brick road. Bookmark the permalink.