the best dog is a rescue dog

“I made up my mind eons ago that I would … also die at sixty-two. The I hit my mid-fifties and started thinking that perhaps I’m being a bit harsh. Now that I’ve scored a couple of decent guest rooms, it seems silly not to get a little more use out of them.”

“I like your truck,” Mo says to the guy parked next to us.

We’re at Changing Hands, a Tempe bookstore that’s a gathering spot for the small cluster of liberals and true believers in a city of 4 million. It’s a respite from the Real World; we’re overdue for a breather.

We’ve parked next to him, drawn by his patchwork quilt of bumper stickers. He’s getting his hiking partner, an old dog, out of the passenger’s seat. He’s in well-worn hiking shoes and shorts; a deep tan confirms his trail credentials.

He shrugs shyly at Mo’s compliment. “Oh, yeah. Well, it’s an old truck. I just keep putting stickers on it because it’s old.” But that’s not true. It’s a journal of his life; a celebration of his past; a proclamation of his beliefs. The truck is him.

We walk in silence for a second. He must not know for sure on which side of the fence we reside. Then Mo says, “It’s just hard not to give up hope,” which strikes me as a pretty amazing thing to say to someone you met exactly 30 seconds ago.

I think that a lot. I remember Garrison Keillor saying shortly after the election that there’s nothing much you can do. Take four years off and wake up when it’s over. But that gets harder and harder as things get worse and worse. And of course he ended up taking a lot more than four years off, so maybe he’s not the person to look to as a moral compass.

And then he says something stunningly profound.

“Sometimes you have to go through the process to understand what good is,” he says quietly. We nod silently, and that was that.

We say goodbye and go in to the store. I huddle in the corner reading Sedaris’ new book. Mo meets with her fan club in the art section. By the time we leave, the guy and his dog are gone. I’m almost certain they actually existed.

Those words have been bouncing around in my brain all afternoon. Life is like hiking. Sometimes you lose your way. But if you’re lucky, you’ll find someone eventually who will point you in the right direction again. You just have to go through the process to find it.

Hope. It’s still out there somewhere. The important thing is to never give up on the hike.

On with the journey … 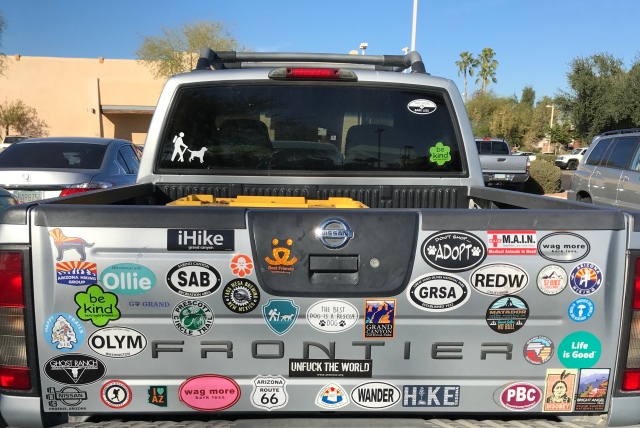 no sock monkeys were harmed in the making of this blog.
View all posts by gary →
This entry was posted in margarine and tagged arizona, dick cheney smells funny, life, political science, religion. Bookmark the permalink.