And then, after 20 years as a law-abiding citizen, I jumped the fence at the track.

It started out innocently enough. Walking up, I could see the only gate open yesterday was now locked, so no track today. But as I’m about to turn around, a guy who had just jumped the fence waves from inside and says hi.

It’s funny, because I was thinking this morning about how silly rules are. Two new studies say you must not drink diet coke and you must do 41 pushups a day or you will surely die. I do, and I don’t, for many decades now, and I’m still here. Sometimes you break the rules and live your life. The Sheehan Experiment of One.

Mostly, you can never let another guy think you’re a chicken. Even though you are.

So I take the leap.

The guy is super fast — that’s him pictured above. There are basically two types of runners: Those who come to the track with a coach in a floppy hat with a stopwatch, and those who don’t. This guy is that first kind.

No idea who he is, but he has great music going and warms up wearing green socks, so he’s OK by me. His coach is wearing brown corduroy pants, so I’m guessing they might not be from around here. You don’t survive long in the desert in corduroy.

He’s running 400s with recoveries after a long warmup. Not quite in gazelle mode yet, but I have to leave before he kicks things into high gear.

There’s something inspiring about sharing the track with someone that fast. I run a 10:03 first mile and my fastest 5k yet in the Year of Fleshman. I walk an extra lap just to admire him floating past.

And then I realize.

I totally broke the law, going over the locked fence and hopping on the track illegally. And nothing happened.

If i had told 20-year-old Gary that drinking two diet cokes a day, avoiding pushups religiously and breaking and entering would allow him at age 62 to run on a glorious day with an elite guy, he would’ve signed up in a second. Me too. 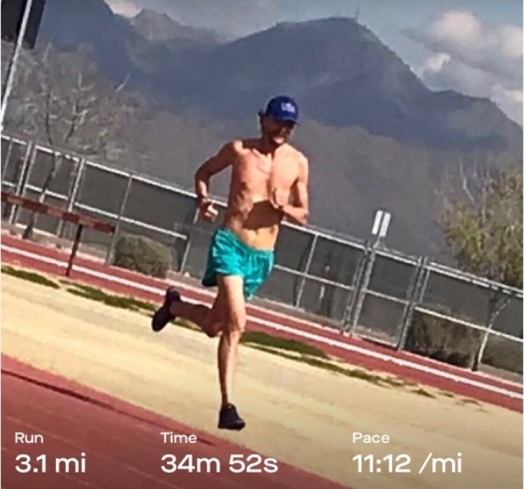