We could have had a pygmy goat

The phone rings. Mo is panicking.

“Can you see if my wallet is  in the living room?” she asks.

She is leaving work and realized she doesn’t know where it is. We’ve been through a long stretch that has left us both a bit fuzzy, and the wallet appears to be the victim of the fog.

She thinks she left the apartment with it. But she threw away the trash, stopped to get her key from a neighbor, went to work, neglected to lock it up there, and now it’s missing. It could be anywhere. Or nowhere.

I scour the joint and am disappointed that I don’t accidentally come across my missing wedding ring during the search. She backtracks through work and digs through her car. Nothing.

I guess it could be worse. The wallet contains a credit card, a debit card, about 20 bucks and her driver’s license. If she had lost it a day before the flight to Seattle, getting through TSA would have been an adventure, so there’s that. But she likes the mug shot on her license and is smitten with the 20 bucks, so it’s sad.

She comes home empty-handed. She wonders if someone swiped it, but I point out she doesn’t have the best track record of losing things, being an artist and all. Three searches of the car and apartment later, she puts holds on the credit cards, resigns herself to the loss, and goes to bed.

This morning as she’s getting ready for work, she quietly declares: “I need a miracle. I need the wallet to turn up.”

She goes out to make coffee and I linger in bed, reading the letsrun boys fighting over whether any self-respecting clown would wear the new Hoka Carbon X. Out of the corner of my eye, I see a shadow on the blinds. Someone has walked up to the door.

I peek out the window, curious which pizza company has deemed us worthy of their valuable coupon. There, on the porch in front of the door, is the wallet.

I call out to Mo: “Your wallet is on the porch.” She replies, “yeah, right.” I reply “really.” I tell her I just saw it there. Thinking that I’m joking, she gives me the I Am Not Amused Look. But she finally goes out to to the porch so I’ll shut up, and there it is, smiling at her.

She must have dropped it in the parking lot. Someone found it, saw the address on her license (with a great mug shot), and returned it. No knock on the door to bask in our thanks, no reward, just a simple, anonymous gesture of all that’s good about humanity. Cash intact. They even left her Saguaro National Park button.

We stare at each other, amazed. It’s a lesson. Mo has been saying for weeks, “I need something good to happen. Just one good thing.” And then, something good happened. A reminder that there is much kindness in the world, selfless acts waiting to happen. It just takes the occasional miracle.

And then it hits me. IMMEDIATELY after she said she needed a miracle, the wallet appeared. We could have canceled the cards, gotten a new license, lost 20 bucks, and she could have wished for a pygmy goat instead. Oh, well. The pygmy goat likely would eat the replacement credit cards.

She gets ready for work, smiling and shaking her head every time she walks past the little wallet. Miracles do happen.

She grabs her glasses as she prepares to leave, pours one last cup of coffee, glances around the room, and then looks at me.

“Ummmmm, have you seen my wallet?”

I really, really want a penguin butler. But that would take a miracle … 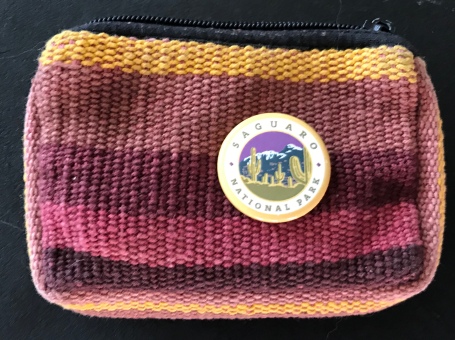