I don’t know anything anymore.
Is that normal?
is it normal to notice the enormity of everything
and just go blank?
— the prophet A.M. Homes

I’m standing in line at a Subway. I’m sixty three years old. I start work in an hour.

It’s funny. I eat at Subway a lot. It’s close, it doesn’t require any thought, I pretend eating bread and processed meat is healthy. It comes with pickles! Never discount the nutritional value of a good pickle slice.

But we never go to Subway when I’m there. Too hard. Does he want black olives? Does ANYONE want black olives? What exactly did they do that caused them to go black? Vaguely evil overtones. What kind of bread does he want? Cheese? What kind of chips? For here or to go? Questions. So many questions. We always end up at McDonald’s instead. Burger and a Dr Pepper, please. Done.

Mo is taking care of a cat while some friends are on holiday. The cat is old. Very, very, very, very, very old. Actually she’s older than that, but typing very over and over again is tiresome, and using cut and paste seems like a compromise of artistic integrity.

She is terribly skinny. I’m not sure why. She eats a lot. Mo says she is deaf, although sometimes I suspect she is faking because she’s not much of a people person. She’s on her last legs, although mostly she sits.

On our first late-night visit of the week, we find her lying comatose under the dining room table. She is perfectly, alarmingly, terribly still. Mo calls out. No response. She moves closer. Nothing. No, no, no, she says, painting the worst-case scenario in her head. She bends over, reaches out, pokes the cat in the ribs.

The cat is — was — sound asleep. She jumps up, scared silly, and glares accusingly at Mo. Like a cat at this age can afford to lose one of her nine lives.

It’s hard to know what the cat is thinking these days. She doesn’t communicate, other than an occasional loud yowl, which could mean anything from “who are you and how did you get in here” to “so just exactly how do you think this brexit thing is going to shake out under the new regime?” It’s hard to tell what’s going on inside her head, so Mo just pets her. Although I suspect cats are inherently pro-brexit, given their isolationalist tendencies.

Mo feeds her and cleans her litter box and changes out her water, talking to her all the while. The owners say the cat doesn’t like people and can’t hear and will hide when anyone comes over, but she follows Mo around and seems to enjoy the conversation. Mo doesn’t know what she’s thinking. That’s OK. She loves the cat unconditionally. She tries to play with the scrawny furball, who reciprocates by staring at her. Mo watches her eat, checks around one last time to make sure everything’s OK, then lets her settle back down in her spot in the dining room.

I sit on the couch until it’s time to go. Mo gives her one last scritch, pretending the cat knows who she is or why she’s here.

I guess that’s the thing. It not important if she is aware. You love her. You take care of her. You pretend she’s not dying. You enjoy time with her while you can. Nobody said having a cat was easy. Well, probably the people at the shelter say that, but they’re sort of like used car salesmen and the Subway guy who offers,  “wouldn’t you enjoy some bacon on your veggie sub for only a dollar more? Guacamole, perhaps?”

Mo shines her phone flashlight on the cat one last time  (she doesn’t turn on the apartment lights because it might hurt the cat’s eyes and vision is the only sense she may or may not have left). The cat gives her one last yowl. I don’t know if she has any idea who Mo is. And that’s OK.

Is this all for you? asks the stoned Subway guy, an apparent hire from the halfway house who appears not to have made it halfway yet. I freeze. IS this all? Is it normal to notice the enormity of everything and just go blank? I don’t know.

Really, I don’t know anything.

But that’s not exactly true. I know these two things.

■ When in doubt, keep saying I love you. The cat might be deaf. But maybe, just maybe, she’ll hear you.

■ When you get to the end of the line, never refuse a white chocolate macadamia cookie. That’s all you need.

It’s going to be ok. 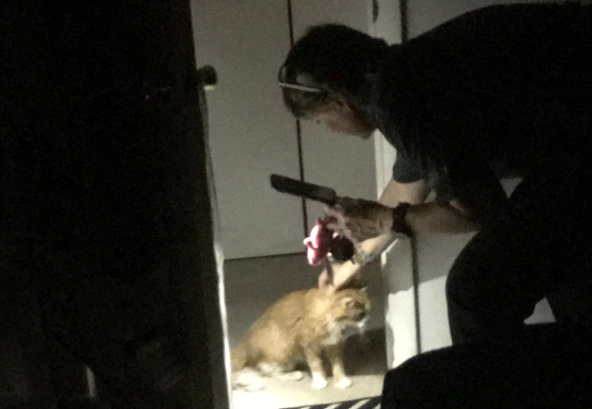 no sock monkeys were harmed in the making of this blog.
View all posts by gary →
This entry was posted in margarine and tagged brothers, life, peaches, religion, yellow brick road. Bookmark the permalink.

1 Response to god shuffled her feet