once upon an interstate

I know when night is gone
that a new world’s born at dawn.
— the prophet robert nolan 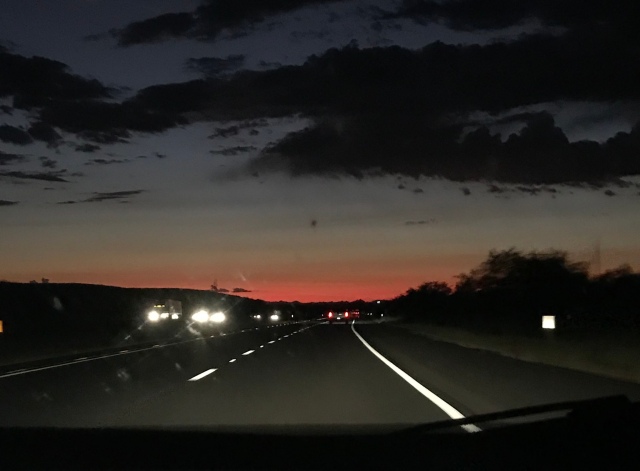 We’re in New Mexico. Or maybe Arizona. Or somewhere in Texas if I got back on the interstate going the wrong direction. It all looks the same here.

We’re driving into the sunset, which seems romantic enough except the sun is perched atop I-10, blinding me. I ask Mo if she can see anything. Mostly she grips the armrest in terror, which I take to be a good sign.

The sun eventually goes below the horizon and off to China, unless it’s blocked under the tariff deal. I’ve been on vacation and may have missed a tweet or 200.

The sky turns dark red, the ominous color seeming to indicate something disastrous is about to happen.

And then it does.

Looking up the road, we see them. First there are just a few, heading toward a semi-truck in front of us. Maybe it’s a vendetta against FedEx, I reason. But soon, they’re upon us, too.

They’re slamming into us, little kamikaze pilots on suicide missions. Hundreds of them, banging against the car. I look ahead and there is no end in sight. Bam bam bam bam. We run over some, others slam into the passenger side of the car. As a native Texan, I feel horrible about killing them, but what choice do I have?

The barrage goes on for minutes, but it feels like hours. The tiny car sways under the attack.

And then, just as suddenly as it began, they’re gone.

We drive along in silence, wondering if it really happened, or maybe it was one of those hallucinations you have after driving 12 hours nonstop under the influence of truck-stop coffee. Mo checks the photos she tried to take. Nothing.

We finally make it home, exhausted, and fall instantly asleep.

I wake up, thinking about that weird dream I must have had. Walking out to the car on the way to pottery class, I see Mo pointing at the front of the car. Parts of them are in the grille, in the wheel wells, strewn in the parking lot. It was real.

I really should check flight schedules …

no sock monkeys were harmed in the making of this blog.
View all posts by gary →
This entry was posted in margarine and tagged 3 a.m., arizona, life, roscoe the talking magpie, texas, yellow brick road. Bookmark the permalink.

2 Responses to once upon an interstate