“Life is a memory, and then it is nothing.”
— Cormac McCarthy

Working from home has its advantages: unlimited paletas.

But Mister Pants sometimes missed the old days, when a wonky computer just meant a call to the sixth floor and a quick visit from the IT guy.

The day started innocently enough, but then the air conditioner went out. With temperatures expected to rise into the mid-60s in the afternoon, desperate action was needed, such as putting on pants so the A/C guy could come inside.

The work was going along OK, if by OK you mean staying out of the guy’s way. But then he had to turn off the electricity to replace a breaker. No problem.

When the electricity came on again, the little black box that connected Mister Pants’ computer to the monitors didn’t work. No power. No little reassuring light. Muerto. Finito Benito. Whoever Benito is.

It was not what you would call a “particularly slow period” in the news business. Mister Pants panicked. Which of course meant rushing out to steal toilet paper from the nearby park. When he came back, still no power.

Was the little gizmo fried by the power outage? Russian hackers? Can a little gizmo get the vermin? There was only one possible solution: weep unashamedly.

Mister Pants wept like a Republican senator whose stock sale before the crash had been exposed. But even that didn’t help. So He Called IT.

The IT guy (not to be confused with Cousin Itt from the Addams Family) promptly responded by chat, the thing that IT guys use now because talking on the phone allows you to hear their increasingly heavy sighs. He pretended not to laugh at Mister Pants’ description of “the gizmo” and “that other thingy” and “the whatzit” and other technical descriptions of his computer equipment. He walked Mister Pants through the steps of dealing with it: Duck and cover. Or possibly those were the steps of dealing with nuclear annihilation in the 1950s. Mister Pants was not thinking clearly at this point.

The IT guy said he was glad to help, wherever the heck he was. The air conditioner guy took his ladder and went home. Mister Pants took off his pants and resumed his life.

The cat looked out the window as she began her 5,475th day in self-quarantine. It’s not so bad if you find someone to give you food and keep up with your toilet, she said.

I suppose, Mister Pants thought. But for the first time, he missed the eighth floor of the newspaper office. And being able to buy soup. He didn’t even like soup. But still.

He ate another paleta, just in case the power went out again and the freezer stopped working. Life is a memory, and then it is nothing. Mister Pants wondered exactly what McCarthy was saying. Likely an exhortation to eat more paletas while you can. Done and done.

And then he went out for his long run. At least nothing can break when you’re running, he thought. His knees just smiled … 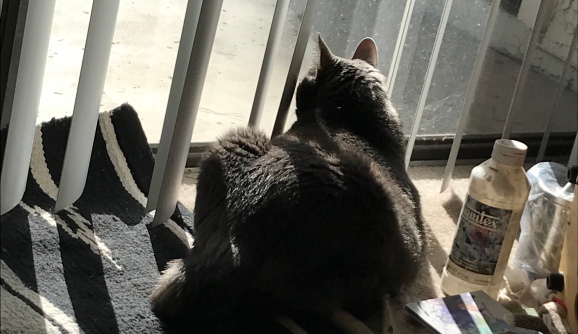