And that was the day Mister Pants realized: He had become One of Them.

The day started innocently enough. A 30 minute Tempo Tuesday under the Tempo Tutelage of Hal Higdon. Mister Pants loved his alliteration, although he should likely change his name to Mister Muskrat if that’s the case. Especially since the End of the World Working From Home Mandate means pants are just a distant memory, much like Mister Pants’ 401(k), which was now a 40(k) and falling fast.

The run went OK, an early morning three bears excursion of not too fast and not too slow and Mister Pants wishing he were still in bed. But he was a Wire Editor this day, which meant he got to ruin people’s lives in five states. Four states if you accept the premise that North and South Carolina are basically the same place but need to feel Important.

He was editing merrily when an ominous knock rattled the door, followed by a shadowy figure flying past his window. That could mean only one thing:

And then he remembered. Mister Pants, panicking over the global frenzy to snap up unneeded items, had ordered more running shoes. Mind you, he already had four pairs  he hadn’t run in yet, three he ran in regularly with plenty of shelf life, and Ernie Pook, whose whereabouts were still a mystery.

But that’s only eight pairs.  What if shoes would no longer be available in the New World? They were made in China or Vietnam or San Luis Obispo or some such place being ravaged by the vermin. So he had snapped up a pair of totally unnecessary, overkillishly, pointless shoes. And now here they were.

He felt shame for succumbing to the hype and joining the feeding frenzy. He felt remorse for throwing away money as others were being forced to tighten their belts to unbearable extremes. He felt bad about refusing to shut down Florida. But dammit. It’s shoes. You gotta have shoes. Especially if you have no pants.

He didn’t even bother to open the box. He placed it in the closet with the toilet paper and oatmeal and hastily bought bulk cereal (Mini Spooners? Seriously?) that would see them through the Nuclear Winter, even though winter in the desert only clocked in at around 65. Salazar had just said he might end the shutdown on April 15. Long-term shoe plans no longer seemed like much of a concern. Bastard.

Mister Pants promised himself this was the last time, the usual junkie’s lament. He would participate in no more binge buying, even though he liked alliteration. He might have mentioned that already.

Char needed a case of soup, a box of rye crisps and an extra toilet seat. Because when you’re 90, you can’t have too many toilet seats. Mister Pants hoped the toilet seats weren’t made in San Luis Obispo.

The owls were talking to Mister Pants. He pretended not to hear.

He went back to reading news stories about people going insane. But now it felt different.

He had become One of Them. 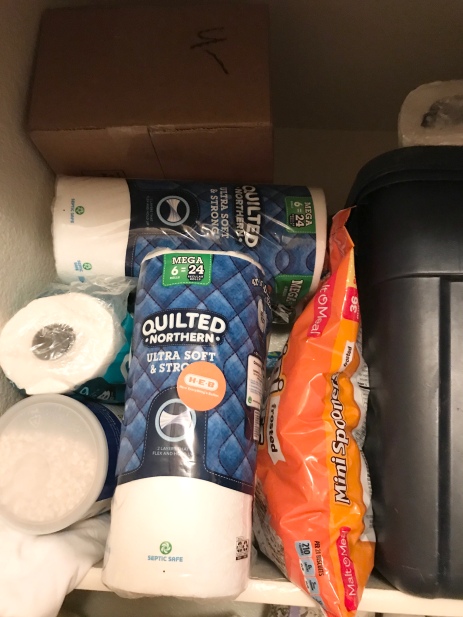