Fetch the bolt cutters.
I’ve been in here too long.
— the prophet fiona

Mister Pants had no idea how to deal with the concept of masks.

On the one hand, he was stunningly unattractive, and any facial covering was welcome. On the other hand, he felt a bit like a desperado whenever wearing one.

He only left his fortress of solitude once or twice a day. He went for a daily run, and sometimes to the grocery store when he ran out of ice cream, which for some peculiar reason seemed to be pretty much daily. Drastic times call for drastic measures.

In the abstract, he agreed with the CDC that wearing a mask was a fine idea. Protect others if he unknowingly had acquired the vermin, and give himself some modicum of protection, if indeed modicum was actually a word. And Salazar refused to wear one, which seemed reason enough to do the opposite.

When running, he found the only drawback was a complete inability to breathe. Apparently breathing is a big deal when running. On the other hand, The Unlikely Runner had sent him a mask with runners on it. And the people on the Ed Whitlock Memorial Loop were not the best at social distancing, being from Scottsdale and privileged and all.

And the grocery store was worse. Mister Pants was shy. He supposed there would be some tipping point when everyone was masked up and he wouldn’t feel weird. On the other hand, he had felt weird since he was 7 years old, and this was unlikely to change anytime soon.

But then he worried about his loved ones. Isn’t the reason we were all doing this stuff to protect those around us?

And that’s the day he got a face mask for his racing pineapple.

Mister Pants wished the world could go back to the way it was back when we just worried about global warming and nuclear annihilation and the Taylor Swift-Kanye rift. He wished he had the “RUN? I THOUGHT YOU SAID RUM!” T-shirt.

But always count your blessings, he supposed. He could barely remember being 7 years old anymore, that day in the alley singing “Texas, Our Texas.” And there was still a chance the vermin would clear up in time for The Big July Race.

And he had a racing pineapple with jaunty sunglasses and a fine face mask as a running companion. If pineapples have faces. And he suspected they did. What more could you ask for? 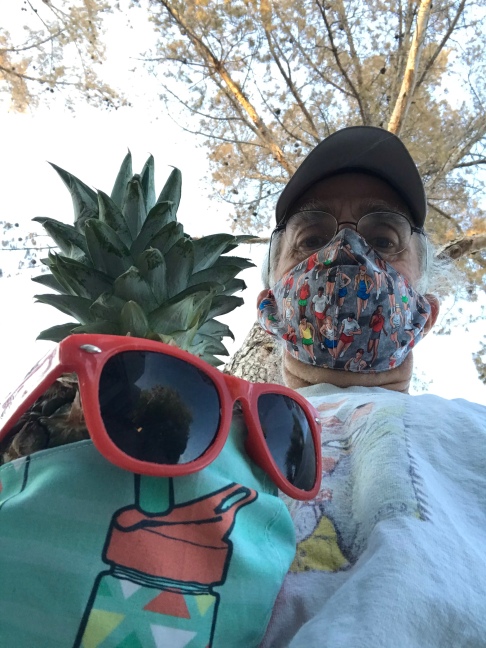