Sunshine and disinfectant. It all sounded so simple.

Mister Pants had read about Salazar’s advice with skepticism. The vermin might be stopped simply by basking in the sun while ingesting disinfectant, the presidente had suggested. There was apparently no science behind this, but science tends to be left behind the curtain during the dark times once the spotlight comes on anyhow. Mister Pants figured what the heck. Although heck wasn’t the exact word Mister Pants uttered at the time.

And so the next day, he set out. The  upper 90s had finally arrived in the desert, leaving behind the memories of the long, icy 60 degree winter. The sun was daring him to come play. He filled his bottle with a mixture of Tailwind and Lysol — the perfect blend of electrolytes, caffeine and household cleaner — and he was off.

There are possibly better roads to run on the planet than the San Juan at South Mountain, but Mister Pants didn’t need them. He had this one. He set out with a song in his heart for the dark times and a  hope in his head for a cure to the vermin at last.

Only two things in life are certain — suffering and coyote poop. The San Juan contains plenty of both. The laws of gravity apply to the course’s roller coaster of  hills, while the laws of cleaning up after little Chaka Khan do not. Although if someone names their coyote Chaka Khan, Mister Pants suspected they should be exempt from all coyote poop laws. Because.

Four miles out, four miles back. He ran and walked and cursed and laughed and marveled at the saguaros in bloom and the cyclists in way too much lycra. He dreaded the impending end to the stay at home order even though he wasn’t currently staying at home. He worried about the woman outside the convenience store. No mask, no shoes, no hope, nothing. He wondered how it all wound end, or indeed if it ever would end at all.

And then, halfway through the run, he noticed.

He Didn’t Have the Vermin. The cure seemed to have worked.

Maybe it was the intense midday heat of the desert. Possibly it was the mixture of raspberry energy drink with simple household cleaner. The mask. The quarantine. Whatever. He didn’t have the virus. He wasn’t going to die.

And then, of course, he did.

The last 2 miles were relentlessly uphill. The worst thing about relentless uphills is that  they never relent. But for a couple of miles, he completely forgot about the sickness. No shutdown. No daily death toll. No concern of impending doom. Just that familiar ocean of agony and honest sweat that comes from running. Salazar had been right after all.

Mister Pants made it back to the car and basked in the chill of the air conditioner.  The words of Mr. Brecht were replaced by those of the prophet Tweedy in Sky Blue Sky.

Oh, if I didn’t die,
I should be satisfied I survived
It’s good enough for now.

He headed home for popsicles and a swig of Clorox.

Only one thing was for sure. There would be more sunshine ahead. And dark times. And coyote poop. And singing.

Chaka Khan indeed. Mister Pants had the music in him. And a Purell nightcap. It’s good enough for now. 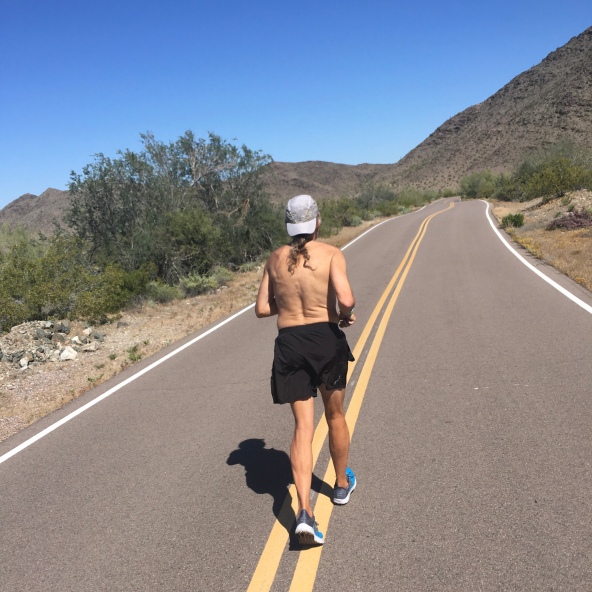 no sock monkeys were harmed in the making of this blog.
View all posts by gary →
This entry was posted in margarine and tagged coronavirus, happily ever after, life, running. Bookmark the permalink.