walk across my swimming pool

Prove to me that you’re divine;
change my water into wine.
— the prophet tim rice
—

I was approaching my senior in high school, lacking any ambition in particular after giving up on baseball (curve balls) and a fascination with marijuana in anticipation of it being legalized 46 years later in Arizona.

In choosing my courses for the year, I could have taken advanced English and math and other stuff to prepare me for college. But that would have required things like “studying” and “caring,” and I was lacking in these particular areas.

So I took a class on balancing my checkbook, which consisted mostly of the world’s greatest teacher Grady Roe telling National Guard stories, a journalism class in which I was required only to draw a comic strip, and a class on the New Testament.

I don’t remember much of any of it. Technology has done away with balancing checkbooks (who knew?), The Continuing Adventures of Rex Zall was a legend in my own mind, and I spent a lot of time listening to “Jesus Christ Superstar” at high volume over the PA system of the school auditorium.

And then I went on with my life. I never listened to the album again.

Recently I began listening to “Superstar” every night after work during the hour or so when copy editors are done but have to sit around pretending to be busy.

I have roughly 75 billion songs on Spotify to choose from, an infinite amount of music. And yet, every night I’m listening to this same album. Over and over and over.

Mo, who grew up as a proper Christian, was taught never to listen to it because of the questionable ending. (spoiler alert: In the musical, Jesus is shot off of his motorcycle in the end after uttering the word “Rosebud.”) So she is none too excited when she finds herself trapped at home during the nightly performance.

As I type this, Judas is about to rat Jesus out for the bazillionth time. Peter is about to deny him, or break into a rendition of “Sledgehammer.” We barrel toward the end.

Neil Young? Sparklehorse? Patty Larkin? Wilco? Partridge Family? Anything other than this album?

No. Always this album.  Always. Every damn night.

I suppose life’s mysteries are best unquestioned. And so here I sit, listening to these same songs that I’ve been listening to for months and months. Look at all my trials and tribulations. On to the next edition. Don’t you get me wrong — I only wanna know. I hope Arizona passes pot in November. I need it.

I should probably balance my checkbook. Rex Zall awaits. 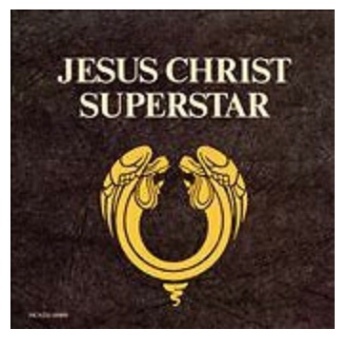 no sock monkeys were harmed in the making of this blog.
View all posts by gary →
This entry was posted in margarine and tagged life, religion. Bookmark the permalink.