I got up early today. I’ve read that in the summer if you run before noon it’s not as hot. It’s an interesting theory.  As I get ready, I’m reading about the adventures of Lauren and Jay.

They’re bicycle tourists. This resonates with me; in a former life I loved bike touring. Mexico to Canada; Phoenix to St. Louis; Alaska; Canada; Maine; Highway 101 — I rode a lot of endless roads. They were always exhilarating, and constantly a bit terrifying. You’re at the mercy of humanity on a bike in the middle of nowhere. After a million miles, I never had a bad experience, but I always counted myself lucky. I eventually settled on running, since there are fewer flats and you never snap a brake cable in a desolate area of Colorado. But I still love to read about the adventures of others.

Jay quit his government job in D.C. Lauren had been biking around D.C. and fell in love with cycling. They set off together to see the world. It’s a great story.

Southern Africa, the Mediterranean, and Tajikistan. A lovely Instagram chronicle of the adventures at simplycycling. It brought back so many memories of similar adventures in my past. Incredible views, endless struggles, the simple joys of a popsicle and a Holiday Inn after weeks of camping. simplycycling.org, It’s a good read.

Lauren is asking a pair of police officers nearby if they know of any cheap hostels when Pablo approaches me. Our bikes and deer-in-headlights gaze have given away that we are not from here. Pablo asks where we’re from. Are we lost?

A little. I tell him our sob story: from America, long bike trip, just arrived, looking for somewhere to camp, having great difficulty. He’s friendly but doesn’t know of any spots in the city. He hasn’t lived here for a while. He’s from Algeciras, and his whole family is still here, but he works up in Belgium. He’s home for the holidays.

Let me go ask my brother, he says. In the meantime, come join the party. Can I get you some hot cocoa? Pastries? Here, take these.

It’s ten minutes later and we’re surrounded by Pablo and his family. We’re drinking hot chocolate and eating pastries baked by his aunt and listening to kids singing carols on the other side of the park.

Such a beautiful moment, found only by standing on the edge of the cliff and taking the leap into the unknown. But they had dark places as well.

My body feels weak. Cold in places and numb in others. Heavy. We have had a long day and eaten little. I am taking long breaths and getting less than my lungs bargained for. We have been riding through this tunnel for probably just minutes, maybe ten, maybe fifteen, but I become untethered from space and time. I am somewhere deep within a mountain. Precise whereabouts unknown.

I see a light and I rush toward it.

Jay later describes topping a 15,272 feet pass. Lauren had succumbed to the altitude and caught a ride to the other side. Jay trudged on.

With the steep grades and thin air (and intermittent snow), this was probably the hardest climb of my life. The last kilometer of so had me pushing my bike about five steps, taking a thirty-second breather, then heaving forward another five. Really glad I did it. No need to ever do it again.

That was on Saturday, his latest Instagram post. What an amazing adventure. What a feeling to make it over 15,000 feet on a loaded touring bike. What a memory.

And then on Sunday, as they were cycling about 40 miles from the capital of Tajikistan, they were struck by a car. The people in the car then jumped out and knifed them to death. Two other cyclists, one Dutch and one Swiss, also were killed.

I finish my coffee, pull on the older pair of Zantes, and head out for the Scottsdale Greenbelt. I dodge wayward shots from frisbee golfers, mutter about bike racers going too fast on a shared path and lament the weather gods.

I come home safely and think about that night at Four Corners when the drunk guys pulled up next to the tent in the middle of the night. I wondered if that would be my last night.

I eat some Cheerios and a banana and begin another day. 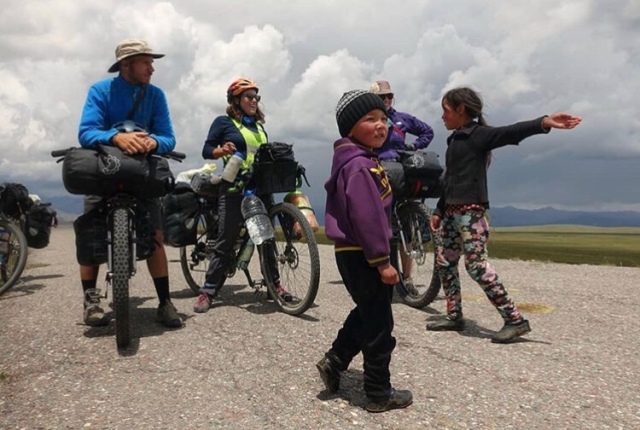 no sock monkeys were harmed in the making of this blog.
View all posts by gary →
This entry was posted in running and tagged life, running, yellow brick road. Bookmark the permalink.