the day i lost lucky forever. a photo essay

Being a vegetarian is hard on animals.

I’ve been trying not to eat them lately. This led to June putting on a pot of beans before leaving for school. What could go wrong?

Rick and I went for our morning walk and then plopped into the living room, which began to fill with smoke. I assumed this was some special effect to go along with the music we were listening to, but I peeked in the kitchen just in case. As it turns out, the beans were on fire.

I am not much of a cook, so I called Mo, who assured me this was not a good thing. I turned the burner off. And then things got worse.

The smoke alarm goes off. It’s not one of those soothing 2001 space odyssey hal what are you doing sounds. It’s a high screeching shriek, like the one made by a smoke alarm.

The dogs go insane. The kitchen is filled with smoke and the stench of burned beans. Rick jams his fingers in his ears. I open the doors to let the smoke out. I set the pot on the porch. I track down the smoke alarm and having no access to a sledge hammer, I take it outside. Crisis averted.

And then things get worse.

As the smog lifts, I do a head count of doggos and people. Belle’s here. Edie’s here. Rick has unplugged his ears. I think I’m here although I can’t see myself.

But Lucky is missing.

Lucky is a dog who Kate and June became attached to when they saw him neglected and chained to a fence. They gave the owner a hundred bucks and a burrito, and he’s been a beloved family member since. He’s very skittish though, I suppose the fallout of being neglected so long. The smoke alarm had sent him into a panic, with only a poorly closed screen door to stop his escape.

I look through the house. I check the yard. i quiz the other two dogs, who are bound to a doggo code of silence. I look again and again, peering down the street. Nothing. I make the dreaded phone call.

Minutes later, she is home. She tries the “shake the dog treats bag” trick. Nothing. She and Rick go out on foot. I drive block by block by block, annoying the pickups unimpressed with my 10 mph pace. (sub 2 marathon!)

June calls and says to come home. He knows he has a good thing, she says. He’ll come home.

But I can’t shake the vision of little Kate’s 6-year-old eyes (i’m not sure exactly how old she is now) when I have to tell her I set her dog on fire.

I drive for weeks, or maybe hours, or at least till June returns with takeout from Rosa’s. It’s crazy. He’s nowhere in the neighborhood. Vanished.

And then it gets better.

June calls. She found Lucky hiding in her bedroom closet. Which is an amazing coincidence, because that is where I had planned to hide when Kate found out.

I pull up and there he is, looking out the gate like nothing happened.

I eat my tostada and share a little, because. Success is survival, the prophet Michael Murphy said. Indeed.

The moral: Just order takeout. Being a vegetarian is hard on animals. 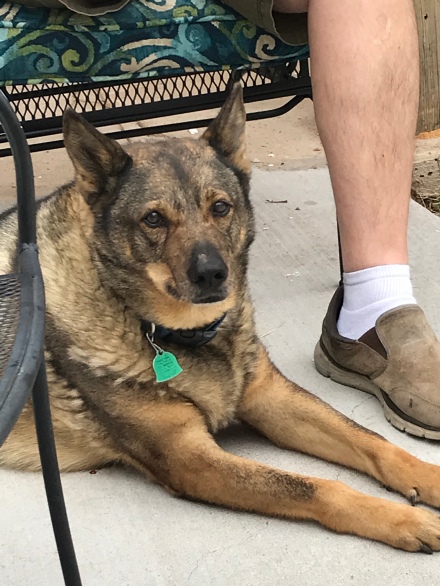